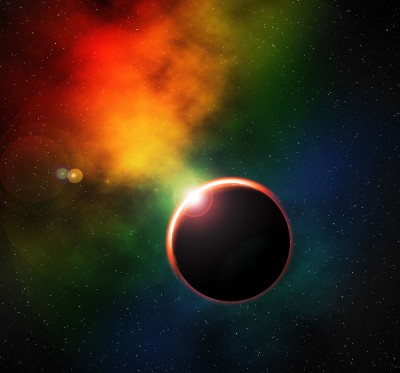 Today’s Scorpio New Moon is a total eclipse, amping up the power and volume of the Scorpio energy to sweep away the debris of the old and decaying aspects of our lives.  Scorpio is intense and passionate, but also courageous and powerful – let go of any desire for the superficial today.

Scorpio is closely connected with death and the occult, and the idea that the veil between this world and others is thinner than we’d like to think.  In this lunation the Sun and Moon are closely aligned with the North Node (future destiny) and opposite the South Node (past karma), giving us an opportunity to propel ourselves forward into a compelling future that is based on the big Truth rather than our ideas that underpin our beliefs about reality.  (A lunation is said to be an eclipse when the Sun and Moon are near the lunar nodes, signifying an event that carries importance and a fated quality.)

Saturn trines Pluto at this New Moon, and since Pluto as the modern ruler of Scorpio has a seat of honor at the table of this eclipse and Saturn is in the sign of Scorpio, ruled by Pluto, this is a dynamic alignment which fosters personal growth through focused effort.

The ancient Celts looked at the Scorpio time of year as the darkest time of year (in the Northern hemisphere) before the world began anew at the Winter Solstice.  There is a quality of rebirth and regeneration with Scorpio that immediately follows the necessary destruction of the old, and we can be the witnesses of this magical transformation if we only open our eyes. The trine of Saturn to Pluto is exact today, although its influence has been approaching for the past couple of weeks or so. The two planets only meet once so this is not a long-term event, but Pluto is still conjunct the Galactic Center, meaning Saturn now trines the Galactic Center as well. Saturn stabilizes and restructures Pluto’s urge for transformation in a way that facilitates change and the letting go that Pluto requires is easier under Saturn’s firm hand.

The Magician card in the Tarot is associated with Hermes and Mercury, but it can also represent the Saturn trine Pluto process. Through hard work, discipline and focus (Saturn), the magical process of transformation (Pluto) occurs. Trines require some application on our part to really get the most out of them, otherwise we may not even notice this event. We rarely notice when things are going well! But this is an opportunity to create regeneration in our own lives in any areas where we have become stuck or need to let go. The wheels of change are lubricated now and ready for action!