Back in June, Mars interacted harmoniously with the waxing phase of the Saturn/Neptune opposition, adding energy to our ability to synthesize the structural energy of Saturn with the dissolution and transcendence of Neptune. Now, Mars in Taurus will form a T-square with Saturn and Neptune which are still connected although they are moving farther from the exact oppositional degree. (Click to enlarge image)

A T-square forms a planet makes a 90 degree angle to two planets that are in opposition (180 degrees) from each other. The conflict inherent in the 90 degree angle, or square, typically generates pressure for a result. The opposition, or 180 degree angle, creates a tension between the two planets that can lead to an impasse or, more productively, to balance. There is stress and tension in a T-square that is resolved through crisis, and ultimately the conflict of the squares helps to push the opposition over the edge into a resolution and balance.

When Mars is the apex planet of the T-square, the planet that is forming the squares to the planets in opposition, there is that much more energy produced. Mars is the planet of war – it rules our physical energy and that which drives us. Mars is in Taurus now, where it is persistent and powerful, but it can also be stubborn and stuck. As Mars squares Neptune over the next few days we may find ourselves stuck (Mars/Taurus) in our illusions (Neptune) as well as finding our self-confidence (Mars) eroded and confused (Neptune). Just a few days later Mars will square Saturn where it will fight (Mars) the restrictions that Saturn places on us. The stew created by these warring influences can be difficult – we are irritated at the boundaries we find via […]

Phil Brown investigates the connection between the Saturn Neptune opposition and the new “cloaking” device invented by scientists in this article he posted a few days ago:

Physics has developed a “cloaking” device composed of copper rings and wires patterned onto fiberglass sheets. This cloaking device can hide objects—and the cloaking materials themselves—by bending light so that the space appears to be virtually empty. An article in the N.Y. Times, “Light Fantastic: Flirting with Invisibility, ”notes that “…the demonstration showed the newfound ability of scientists to manipulate light through structures they call ‘metamaterials.’” An object literally becomes invisible, at least to microwaves. . . .
Times).

The Saturn-Neptune opposition has to do with, among other things, creating form or giving form to that which is formless. This cloaking device does just the opposite: it gives formlessness to a form. Either way, however, it’s Saturn (form) and Neptune (formless).

This invisibility device is also a metaphor for the larger socio-political manifestations of the Saturn-Neptune opposition. The 1971-72 Saturn-Neptune opposition coincided with the publication of the Pentagon Papers, which made visible the secret planning that went into the Vietnam War; revelation of the secret Tuskegee syphilis experiments; and the beginnings of the Nixon government’s secret Watergate activities–a real invisibility device which, fortunately for the country, malfunctioned and was later exposed through the “Watergate tapes.” These all took place very close to one of the exact oppositions of Saturn and Neptune.

Jupiter and Neptune have also been tightly linked to the invisibility discoveries: according to the NY Times article the early Duke experiments took place last October as Jupiter (expansion) was square to Neptune (the hidden), suggesting that the project may have been overambitious, and also trine Uranus (new discoveries). Earlier experiments in March 2005 […]

Tomorrow’s Full Moon occurs at 9:05 pm EDT and brings with it a flood of positive energy. The Moon is full in Sagittarius, the sign of expansion, adventure and optimism. During the Full Moon the solar light of conscious awareness illuminates the instinctive depths of our lunar experience, and in Sagittarius our own lunar depths are lit up with a bright fire of knowledge and awareness. Sagittarius loves a good party, and the Sagittarius Full Moon is a time of celebration.

Mars adds a burst of energy: finding its fullest expression in Aries, the sign which it rules, it trines the Sun/Jupiter conjunction and showers us with courage and inspiration. Beth Owl’s Daughter has synchronistically pulled the Knight of Wands card for this week, the perfect metaphor for the Mars/Jupiter combination:

The Knight of Wands is spontaneous, hot-headed, charismatic, quick to laugh or anger, and a creative blaze of activity. He is often charming, and pulsing with sexual energy. But he is also extremely loyal to his, understandably, huge circle of friends. While he can be impulsive and unpredictable, he takes his honor and integrity absolutely to heart, and is a true heroic figure.

Expanding the party is a conjunction of the Moon to Jupiter, the ruling planet of Sagittarius. Despite the broader planetary influences which are challenging us (see below), Jupiter and Sagittarius look for the higher path to freedom. Preferring to ignore the darkness, for the next few days we have a clear sightline to the light at the end of the tunnel. This could be a danger, however, because the opposition of the Full Moon (Sun opp Moon) is exactly square to the lunar nodes forming a lunar Grand Cross. The north node and south node of the lunar path are signposts pointing […] 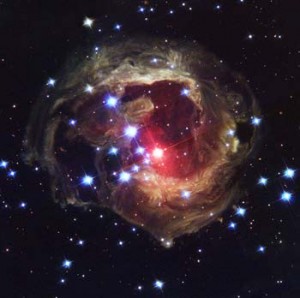 art by the Universe, courtesy of Hubblesite.org

updated 5-22-07. With Chiron now in retrograde motion, through October of this year we are likely to revisit old wounds, learning how to release them so that we can move forward with greater wisdom. Neptune follows shortly thereafter, turning retrograde on May 24 and calling on us to connect with the deeper truth that lies within us.

The combination of Chiron and Neptune is a potent one, and as they dance towards a conjunction in early 2010 we will see their effects more and more. Neptune encourages us towards a life of spirituality and imagination; it unwinds the boundaries of our minds and hearts to permit us to expand our experience beyond previously suggested limits. Chiron is the “rainbow bridge” between the personal and the transpersonal as suggested by its eccentric orbit bridging the personal planets (through Saturn) and the transpersonal outer planets. Chiron is the doctor that heals the wounds of our earthly incarnation by bringing these wounds to our attention and facilitating their release through focused intention and presence rather than avoidance. As Chiron retrogrades back through Aquarius it will make the second in a series of sextiles to Jupiter on May 31 which will expand (Jupiter) the potential of this healing process, a process which will complete in September of this year.

As Neptune retrogrades it will revisit its exact opposition with Saturn for the final time. Under the Saturn/Neptune opposition our dreams and illusions (Neptune) have been startled into reality by Saturn, but this has worked in reverse as well with Neptune reminding us of the dry desert of what we call “reality” without a sense of life’s mystery. Debates over science vs. spirituality, scandals in government revealing […]

Dharmaruci writes:
If two or more outer planets are making an aspect to each other, particularly a hard aspect, then they become the defining configuration in the sky, the wider context in which all other planetary movements need to be seen. By and large. Because, for example, an outer planet moving into a new sign, like Pluto moving into Capricorn next year, is also pretty important.

The Saturn-Neptune opposition has been the defining configuration since late 2005, and particularly so since Aug 2006, when these planets made the first of 3 exact oppositions, the last of which will be on 25 June this year. At present, Neptune has come to a virtual standstill in the sky, and on the 24th May will turn round and slowly back into an opposition with Saturn.

So we are about to enter the final phase. Processes that began around last August with the first exact opposition, and that reflect Saturn-Neptune, will reach some sort of outcome next month. The two obvious political processes that have been described by Saturn-Neptune are the end of Tony Blair’s leadership in Britain, and in the USA the coming to terms with the reality of the Iraq War.

With major Neptune transits having characterised Tony Blair’s time in power, the final of the series, to Pluto (power) at 21 Leo, always looked like being the end of the road for him. I predicted it in early 2004, except I wasn’t sure at what point in the transit it would occur. Now I know: while Saturn was in on his Pluto as well. It’s obvious with hindsight!

Tony Blair as PM has always been Neptune: the unreal expectations of him, the visionary […]