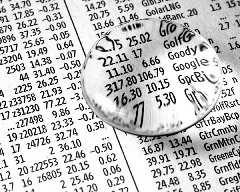 The conjunction of Jupiter to Uranus is still creating optimism in the markets that defy the news: “U.S. stocks closed higher Monday as investors were encouraged by earnings from Citigroup and a measure of home-builder confidence that topped expectations.” (read more here…)

Jupiter is the planet of confidence, and in tandem with Uranus it seeks sudden changes and liberation from negativity.  The combination of these two planets is not the most realistic time in the world, and we are seeing this manifesting in the market, which rebounded today based on supposed confidence from home builders after an index reported today that builder confidence is up.  The National Association of Home Builders chief economist interjected the voice of reason, saying “it could be another couple of years before the industry returns to normal.”  There are signs of recovery, and that we have turned the corner as I’ve been reporting here.  But the fundamentals are not strong enough yet to create real movement in the value of equities.

Mars is in Scorpio now, the sign of shared values and other people’s money (and therefore investments and the stock market), and Mars is moving into alignment to trine both Jupiter and Uranus.  This should be a pretty positive week for the financial markets, although the retrograde movement of Venus will keep things from moving too far, too fast.

October is often a down month for the Dow, but after the intense planetary cycles of this summer investors are ready for a return of happy exuberance.  They are likely to continue to find it until Mercury enters Scorpio on October 21st and begins to analyze the financial situation a little more thoroughly.

Overall, though, I continue to feel that we have turned the […] 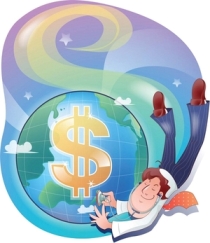 The Dow Jones industrial average had a chaotic day yesterday, crashing more than 1000 points and then careening wildly back up.  At the end of the day the Dow had dropped about 3%.

Some price swings of stocks defied logic. The shares of  Accenture, a consulting firm, fell from $40 to a single penny and then back to $40 again. Procter & Gamble traded at $54 on the New York Stock Exchange. But at the same time, Nasdaq was reporting that the company’s shares were selling for $39.

These technical glitches (Mercury Rx) in themselves did not cause the panicked sell-off on Wall Street yesterday but the resulting anxiety and unease reflects the current planetary cycles.  As I wrote in Lynn’s Skywatch for May, there is a shortage of the air element which suggests a lack of objectivity.

In addition, Saturn and Neptune have slowed down to a standstill in preparation for their change of direction at the end of the month (Saturn will turn direct and move forward, Neptune will turn retrograde).  The force of both planets is more intense than usual with Saturn creating tests and challenges, and Neptune showering us with confusion and delusion.

To complicate matters further, Jupiter (confidence and optimism) is within range of a conjunction to Uranus (radical change) and both planets are opposite Saturn.  Wild swings of all kinds are common with Jupiter/Uranus combinations, as are incredible new inventions and other brilliant ideas.  Jupiter/Uranus wants to be positive and enthusiastic and resists any effort to curtail one’s freedom, and Saturn puts the brakes on creating resistance and repression.

There’s nothing inherently negative in the planetary cycles right now that suggest another crash or correction is likely – in fact, I’ve been predicting that the Jupiter/Uranus conjunction in May […]