The New Moon in Libra on October 12th-13th invites us to find our own peaceful center within where true equanimity will aid us in rebalancing those areas of our life which are under stress or out of whack.  Libra is the sign of balance, symbolized by the scales of justice.  Under the influence of Libra we may find ourselves swinging from one extreme to another as we attempt to achieve a neutral point that will take us back to the equilibrium that comes from being truly in balance with our own emotions and drives.

Like all New Moons, this Libra lunation marks the beginning of a new lunar cycle.  Intentions that are set now will make their mark throughout the next 28 days or so.  With the energy of the Sun and Moon working together, the yang solar influence fuses with the yin lunar receptivity and acts as a powerful symbol of the yearning for balance which is so important under Libra.

Uranus, planet of radical change and electrical impulses, is poised in a tense opposition to the New Moon which will counterbalance that Libran inner harmony.  While we find that center of peace within us, we will be challenged by Uranus to step out of our comfort zone and dare to open our minds to a new reality or a new way of thinking about our present one.

Under the Libra influence, everything around us becomes a mirror reflection of our inner world, and every action demands an equal reaction.  It’s important to understand the interconnectedness between what we experience within, and what we draw into our lives from the outside.  This New Moon can aid in this understanding and facilitate our ability to alchemize every […] 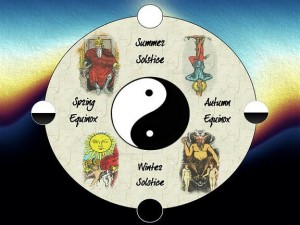 Astrologer Gary Caton has a nice article [article no longer available] about the pagan symbolism in the Wheel of the Year and also connects the Solstices and Equinoxes to the Tarot:

There are 4 cards in the Tarot which tell the story of these 4 cardinal points that begin the 4 seasons. The first of these cards is The Sun. This is the card of the Winter Solstice and it speaks of the re-birth of the Sun at mid-winter as the days begin to grow longer again. It is followed by The Emperor (Spring Equinox), which speaks of the triumph of Light over Darkness as the days become longer than the nights. The Hanged Man (Summer Solstice) follows, and speaks of the surrender of Light to the growing Darkness as the days begin to shorten in length. Finally we have The Devil, who is sort of an anti-Emperor and speaks of the triumph of Darkness over Light as the nights become longer than the days. …

Beth Owl’s daughter has posted some very interesting profiles of the two candidates (still two, as of this writing!!) based on their Tarot profile. The Tarot profile come from the numerology of the birth date and is quite interesting!

As a lightning rod for America’s racial divisions, his Justice card challenge is to deal with the problems of racism while also remaining impartial and distancing himself from being defined by them. Tapping into his gifts of the High Priestess, he truly can become a bridge across the abyss – between the past and the future. Like her, he sits between the columns of black and white.

Because they seem so self-contained, yet enigmatic, people with this profile naturally engender profound trust, and often, even casual acquaintances will confide their innermost secrets and longings. High Priestess/Judgment/Justice people are world-class listeners, and exude a sense of serene acceptance, often simply mirroring back to those around them, but seeming as if they know their thoughts. This quality of enabling people to feel heard and seen is a rare and great gift.

It is no surprise that Barack Obama has sometimes been characterized as aloof or even messianic. The High Priestess/Judgment/Justice profile is someone who walks his talk. He is deep, not easy to know, and is rarely casual or chummy. He is on a mission, a sacred calling, and is someone to whom compromise may seem like excuse-making. The energy that flows around his profile is such that he would always be deeply sensitive to the possibility of imminent, apocalyptic change.

Hillary’s profile is based on the World, the Empress and the Hanged Man. According to Beth,

Hillary Clinton would never doubt that anything is […]

Owl’s Wings – a bit of magic

My friend and tarot goddess Beth Owl’s Daughter recently sent me a link to her blog which I am enthusiastically adding to the blogroll under Cool Sites and Blog Friends. This is a beautiful site with inspiration and tips for leading a more magical life. An excerpt:

In most spiritual traditions, the garden is viewed as a holy place. Since the dawn of civilization, gardens have been sacred sites for the invocation of the Gods, for meditation, inspiration, and reflection. It is no accident that in medieval times, monastery gardens were both utilitarian places that provided food and medicine, as well as havens for prayer. In Japan and China, gardens offer peace, privacy, and a place for meditation. And in the folklore of ancient Britain, magical associations are given to nearly every tree, herb, bush and flower of the wayside and the garden.

For the garden is a magical threshold between the wildness of Nature, and the structures of humankind. People through the centuries have discovered that, out among the potatoes and lilacs, their gardens are a place of power and enchantment. From there, we can observe the effect of the Moon, the Sun, and the shifting influences of the zodiac on the growth and decline in Nature. In gardens, we can contact the beings from other realms who may otherwise be elusive or unknown to us. There, we find the faerie races that are most comfortable with human interaction, as well as the devas and elementals who are associated with the subtle creative forces of the Earth Herself.