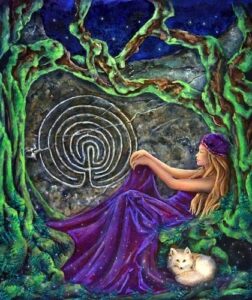 The lunar nodes mark the intersection of the apparent (from our perspective on Earth) paths of the Sun and the Moon, and symbolically this marks the crossroads of consciousness (Sun) and instinct (Moon). The ascending, or North Node, points the way to the future, and the descending, or South Node, describes the journey’s origin and the energies we are moving away from and which will sometimes hold us back.

Because of precession and the way the earth orbits relative to the Sun, these points we call the lunar nodes move backwards through the zodiac unlike planetary bodies which move through the natural progression of signs from Aries to Pisces. I like to think of this as part of the karmic aspect of the nodes – an opportunity to retrace our past steps to clean up any lingering unfinished business.

There is a great deal of debate in astrological circles whether to use the True Node, the actual position of the lunar nodes which wobble back and forth almost daily, or the Mean Node which averages the nodal position. In a natal chart I use the True Node because the actual position is, to me, important to the symbolism of its meaning in the chart. The True Node will enter Taurus (at 29 degrees) on January 30, 2022.  The Mean Node (the averaged position) actually entered Taurus on January 10th. In any case, this is a major shift of focus for humans living on Planet Earth and changes the narrative a bit, as well as the style in which we encounter the experiences around us.

For the past eighteen months or so (since May 2020) the North Node has been in Gemini, with the South Node […]