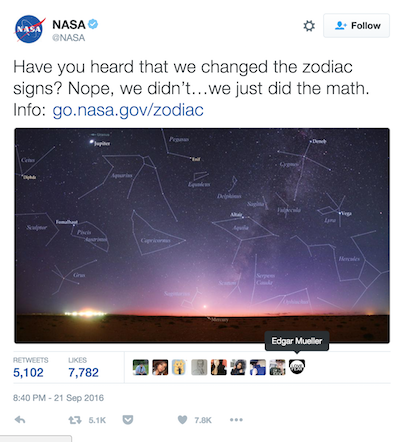 About five years ago it was discovered that because of the shifting of the Earth’s axis, the constellation Ophiuchus was now closer to the apparent path of the Sun as we observe it from Earth, and astronomers conjectured that this then made Ophiuchus a thirteenth sign in the zodiac.

This popped up recently as “news:”  NASA had changed the system of the zodiac to incorporate the thirteenth sign.

It’s not news the zodiac that we use in Western astrology does not line up with the current placement of the constellations.  This is due to what is called “precession,” in which due to the earth’s wobble the relationship between the earth and the stars changes over a “Great Cycle” of 26,000 years.  This is why every 2160 years or so we go through another zodiacal age, like the transition from the Age of Pisces to the Age of Aquarius that we are in right now.

Astrology is not astronomically correct.  Planets don’t really move backwards, and the earth isn’t the center of the solar system.  But that is how we observe the planets astrologically, […]

There’s no such thing as bad publicity, and astrology has had LOTS of publicity over the past few days with the big news over the 13th sign and the precessional shift.  Rachel Maddow weighs in and explains the whole thing, except I’m not sure that her astronomy is correct when she ties the Moon into the situation. The astrology comes in at around four minutes and be sure to catch her very last line: