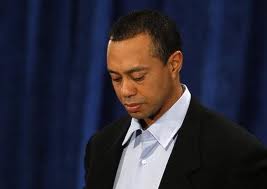 When I first wrote about Tiger Woods’ little accident outside his house, there was already a hint of impropriety, but who could have imagined the extent to which this drama has unfolded.  As of today there are a total of 13 mistresses that have claimed to have been involved with Tiger Woods.  As if that weren’t bad enough, his wife has purchased a home in her native Sweden, the local child welfare office paid the Woods’ home a visit, and he has been dropped by several of his lucrative endorsement deals.
And the story, as everyone now knows, goes way beyond infidelity.  Lurid tales of three-ways fueled by Ambien cocktails, orgies with prostitutes, and a multitude of Barbie-like mistresses will probably never cease haunting Tiger Woods.  And if that weren’t bad enough, Al Sharpton has blasted Woods for his “lack of diversity” in his dalliances and relationships.  And yesterday Woods announced that he was taking an indefinite leave from golf to attend to his family.
These affairs are, for the most part, not one-night stands or midnight hookups – they are long-time relationships.  Some of them began before Wood’s marriage to Elin Nordgren, and the publicized text messages make it apparent that Woods is a man who is hungry for more than sex – he is hungry for an intensity that his public image does not allow for.
Woods has the Sun in Capricorn, the sign of achievement and success.  He was a prodigy and began his career at the age of two.   His Sun is squared by Jupiter, bestowing a kingly good fortune upon him but also suggesting that he will be undone by hubris, the sin of pride against the gods.  Like Icarus who flew too […]
Share this article...
By Lynn Hayes|2009-12-14T15:21:10-05:00December 14th, 2009|People|Comments Off on The Astrology of the Tiger Woods Story:
Read More

The Drama of Tiger Woods

As the world knows by know, Tiger Woods was in a car accident in the wee hours of Sunday morning.  As he was driving away from his home in Florida he backed into a fire hydrant and hit a tree.  He was found with lacerations on his face that evidently occurred from an altercation with his wife as the result of revelations of an affair that Woods had with a nightclub hostess and possible others.
Regardless of what happens in Woods’s personal life, his public image has taken a big hit.
I won’t take the time right now for a detailed analysis of Woods’s astrological chart, but a brief overview reveals that he has the Sun in Capricorn which is the sign of success and achievement.  Virgo is rising in the chart (born December 30, 1975 at 10:50 pm, Cypress CA), which reveals his methodical approach to the golf game and his persona and appearance (as represented by the ascendant) of a modest perfectionist (Virgo).  His Moon, though, tells a different story – his Moon (representing his emotional needs) is in freedom-loving Sagittarius, optimistic at heart and full of confidence.  That confidence is expanded by a very big Jupiter (planet of optimism and good fortune) in the assertive sign of Aries, revealing his inner competitive nature.
Uranus is the planet that inspires reckless behavior and urges us to break free of the shackles in our lives that restrict us.  Uranus has been an important influence for Tiger Woods since May of 2008 when it crossed the cusp of Woods’s seventh house of marriage, transiting back and forth over the next 18 months.  At the same time Uranus was in a challenging square (90 degree) formation […]
Share this article...
By Lynn Hayes|2009-12-02T17:17:03-05:00December 2nd, 2009|People|Comments Off on The Drama of Tiger Woods
Read More