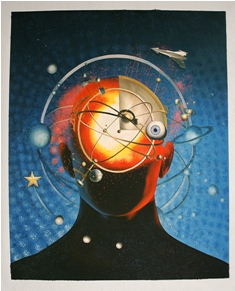 Modern science is turning our notion of what constitutes the Universe on its ear, and nowhere is this more evident than the theory that the Universe itself is a hologram.  Beginning with quantum physics and particle/wave theory, which suggested in the early part of the 20th century that the Universe is operating on many different levels than our three-dimensional reality would suggest.  One of its early proponents, Niehls Bohr, wrote: “Anyone who is not shocked by quantum theory has not understood it”.

I make no pretense of understanding quantum theory, but I know that somehow it explains the nature of the multidimensional physical reality that mystics have talked about for thousands of years. David Bohm’s theory of the Implicate Order suggests that everything is connected with everything else – the principle that underlies all of holistic spirituality. Since everything in our Universe is made up of energy, and the movement of energy enfolds the entire Universe of space and time, this “enfoldment” may continue endlessly into infinite dimensionality.

It is psychedelicized thoughts like this that used to send me into a tailspin of terror!  But this concept of an endless flow of connectivity between dimensions is something that has been in the forefront of mystical thought since the beginning of time.  The very basis of astrological thought, the adage “as above, so below” is a holographic concept.  From the Upanishads, written in the second millenium bce:

As great as the infinite space beyond is the space within the lotus of the heart. Both heaven and earth are contained in that inner space, both fire and air, sun and moon, lightning and stars. Whether we know it in this world or know it not, […]