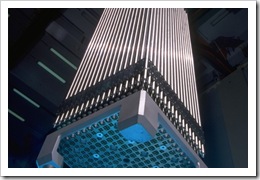 In a stunning display of astrological synchronicity, it turns out that the reactor (known as Unit 3) in the Fukushima nuclear plant that exploded yesterday is more toxic than the other reactors because of the fuel that’s been used there.

At a press conference in Tokyo, Masashi Goto, who worked for Toshiba as a reactor researcher and designer, said the mixed oxide (MOX) fuel used in unit 3 of the Fukushima Daiichi nuclear plant contains plutonium, which is much more toxic than the fuel used in the other reactors.
MOX fuel is a mixture of uranium and plutonium reprocessed from spent uranium, and is sometimes involved in the disposal of weapons-grade plutonium.

I’m not a scientist, and perhaps some of my scientist readers (and husband) will weigh in on this issue. It is my understanding that Uranium has some unique (of course) properties in that it can quickly generate a nuclear reaction but cannot sustain it.  This correlates with the qualities of astrological which instigates a radical reaction but often doesn’t stay around to put the pieces back together.  Plutonium is evidently made FROM Uranium and in combination with Uranium can sustain a chain nuclear reaction for power plants.

The combination of Uranium and Plutonium would be the astrological equivalent of a conjunction, in which the elements are fused and work as a team.  But we […]