Uranus in Aries began a four-year cycle of a challenging square to Pluto and Capricorn this summer when the two came within one degree of an exact alignment.  Squares are 90 degree aspects between two planets that create friction and conflict which builds to a crisis point that demands some kind of resolution.  Consequently, square aspects can often be found in times of great change.  Uranus rules sudden change that is revolutionary in nature, and Pluto rules transformation and the death of old ways that no longer fit the needs of society so you can see where the two in conflict would create a few hiccups on the road of life.

Much has been said, in these pages and elsewhere, comparing this current time to the 1960s when Uranus and Pluto conjoined in Virgo, breaking apart the conservative mores of the 1950s and fostering revolution in many different arenas: on college campuses, in black power, the feminist revolution, a new way of looking at mental illness, and so many more.  But what about earlier times of Uranus/Pluto stress?

Uranus and Pluto were square each other between 1932 and 1934, although the aspect began to culminate as early as 1930.  1930 was the year of Pluto’s discovery and is often linked to the invention of the atomic bomb which is a symbol of Pluto’s devastating power to destroy and rebuild.  This period between 1932 and 1934 marked the rise of Adolf Hitler in Germany and the sweeping reforms by President Franklin D Roosevelt in response to the Great Depression.  At the time Pluto was in Cancer and Uranus in Aries as it is now.  Uranus in Aries is associated with warfare and individual expression, and […] 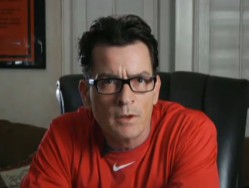 I didn’t want to write about Charlie Sheen in the middle of the earthquake and tsunami in Japan when Uranus entered Aries, or when Neptune entered Pisces, equally big news from an astrological perspective, or when Pluto turned retrograde this weekend. But now that things are settling down a little astrologically I think it’s time for a little comic relief in the form of a look at the astrology of Charlie Sheen.

In 2009, when Sheen was arrested for threatening his then-wife with a knife, I wrote this profile:

Sheen is one of the “Uranus/Pluto” generation who were born between 1962 and 1968 when Uranus (radical change) and Pluto (death and rebirth) were conjunct in the sky.  This entire generation has a thirst for breaking down barriers (Uranus) in order to rebuild something that has become stale and dysfunctional (Pluto), and for Sheen this hunger is even more intense because his Sun is a part of that conjunction.  In addition, Chiron (emotional wounding and sensitivity) is conjunct oppressive Saturn in his chart, signifying a deep well of emotional pain within him that never quite disappears.  This is a powerful combination of planets that require a fair amount of self-understanding to master, and sometimes that process takes a lifetime.

Sheen’s Moon is part of this configuration, and it falls in the expansive and happy-go-lucky sign of Sagittarius.  This complicates matters for Sheen, since it makes it more difficult to do the solid emotional work that […]