Sorry for the light posting over the past few weeks – I’m out of town this week and feeling quite refreshed and ready to get back to blogging! September 15th brings the New Moon in Virgo which highlights Ceres, the former asteroid which was reclassified in 2005. Ceres represents the nurturing of the body and our connection to our own bodies, and Virgo itself presides over the mundane details that we must attend to when we live in a human body. The food we eat, our personal hygiene, ordering the details of life – these are important qualities that Virgo manages and the inclusion of Ceres here makes this New Moon the perfect time to begin a project of self-care or making changes in the personal ecology of our lives to better support ourselves. Cleaning projects, new systems of managing our time and resources – all of these are highlighted under the Virgo New Moon. It is a mistake to believe that VIrgo is virginal – there is an earthiness and sensuality to Virgo just as with all earth signs.  The key here is to integrate that earthiness with our understanding so that we can gain greater comfort as spiritual beings having a human experience. Ceres aligns in a harmonious trine to Saturn and conflicts in a square to Mercury which sets up an interesting dynamic of comfort combined with stress in this relationship between the body and the spirit that culminates at the New Moon.  With this energetic tension at work in new lunar cycle we can discover new ways of looking at our relationship to the world around us – what it means to be incarnated in the physical reality in which we find ourselves. Mercury is […] 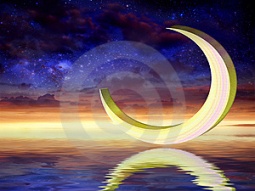 The New Moon on Friday September 18, 2009 captures all of the powerful September planetary events and provides us with an opportunity to pull them all together for the new lunar cycle.  New Moons, remember, represent the beginning of a brand new lunar experience as the Moon conjoins the Sun and their dance begins anew.

The New Moon is actually the dark of the Moon – the Sun completely obscures the Moon’s light, and we begin the new cycle in a void.  This is an opportunity to let go of the lessons learned from the previous lunar cycle and begin the anew in the sign of Virgo.

Virgo isn’t a very exciting sign – it won’t bring fame or fortune like Leo, and it won’t attract passion and power like Scorpio.  Virgo is all about the necessary things we have to do to maintain life in a body like eating right, getting enough exercise, making sure our teeth are brushed and our house is clean.  But Virgo also inspires the powers of perception and discrimination.  Under Virgo’s influence we are able to sort through the complex factors that tend to confuse as and achieve clarity and purpose.

This New Moon sits right on the Saturn end of the Saturn/Uranus opposition, suggesting that the tension here between the Uranian drive for change and the Saturnian drive for discipline and convention will be exacerbated, but the Virgo influence will attempt to impose some kind of order on this tension.  Virgo wants to be prepared for everything, and needs a road map before beginning any kind of new adventure.  During this New Moon we will be called on to create a plan and a strategy (Virgo/Saturn) to help […]

Sorry I haven’t been posting on my usual daily schedule, this week has been incredibly busy as transiting Mars begins to square my Libra stellium and transiting Pluto is racing back to embrace my little Capricorn Mars. Too much astrological information perhaps???

At any rate, Dharmaruci and I have evidently been a tag team as he posted on Tibet and Survivalism within a couple of days of my posts on these topics. I’m going to take a look at his chart of the Tibetan uprising and see what I can make of it. Meanwhile, he did write that the uprising evidently occurred during a Void Moon.

I’ve written several times of my disdain for the Void Moon, a disdain which is shared by many of my colleagues. However, many more of my colleagues embrace the concept and I am attempting to give it a second look using my trusty Planetary Guide from Llewellyn which is very easy to read. Unfortunately, though, I find that my life is too busy right now to really stop doing things when the moon is void of course (the period between the last lunar aspect to another planet and when it changes signs), and I also have not had time to evaluate the results of events in my life that occurred during the Void Moon. Adherents to the Void Moon theory report that events and projects begun while the moon is void do not come to fruition, that it is a good time for working with the unconscious but rather less beneficial for business or other ventures that are rooted in the material world. Virgo is associated with health because it generally is concerned with matters of hygiene and balance between the mind, body and spirit. With Saturn in Virgo we are likely to see more issues like this in the mainstream news:

In the United States, the problem isn’t confined to surface waters. Pharmaceuticals also permeate aquifers deep underground, source of 40 percent of the nation’s water supply. Federal scientists who drew water in 24 states from aquifers near contaminant sources such as landfills and animal feed lots found minuscule levels of hormones, antibiotics and other drugs.

Perhaps it’s because Americans have been taking drugs — and flushing them unmetabolized or unused — in growing amounts. Over the past five years, the number of U.S. prescriptions rose 12 percent to a record 3.7 billion, while nonprescription drug purchases held steady around 3.3 billion, according to IMS Health and The Nielsen Co.

“People think that if they take a medication, their body absorbs it and it disappears, but of course that’s not the case,” said EPA scientist Christian Daughton, one of the first to draw attention to the issue of pharmaceuticals in water in the United States.