The astrology of Vladmir Putin and the war on Ukraine

Vladmir Putin launched an attack against Ukraine at about 5 am Moscow time on February 24, 2022.  This attack should not have been a surprise to anyone who was paying attention since Putin has been announcing his intentions for quite a long time but Putin has the Sun in Libra, and Libra can be a master manipulator when Scorpio is rising in the chart.

I should point out that there is no verified birth time for Putin as birth times aren’t recorded on birth certificates in Russia, but the birth time of 9:30 am was provided to an astrological researcher back in 2000 and this is the chart that is widely used today.  If this isn’t Putin’s actual chart it’s the chart he would want to have, with the power sign Scorpio rising and Pluto conjunct the Midheaven along with the South Node. These are powerful placements, especially with the ascendant ruler Mars in a trine to Pluto, Scorpio’s modern ruler which tends to facilitate the rise of power, and a square from Jupiter to Pluto which tends to bestow a sense of self-righteousness.  Full disclosure: My own date of birth is five days after Putin’s and our natal charts are very similar.

There are many different charts for Russia as there are for any nation which has undergone a great deal of change. December 8, 1991 is the date that Belarus, the Russian Federation and the Ukraine announced the Minsk Declaration which dissolved the Soviet Union, but the agreement wasn’t ratified by the Russian Parliament until the 12th of December that year at 13:22 according to Nick Campion. On the other hand, Adrian Ross Duncan uses the chart of December 25, 1991 when the flag for the new Russia began flying at […] 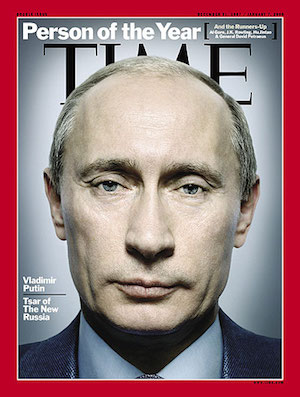 Time Magazine has declared Vladmir Putin to be Man of the Year for 2007, saying he is the single person with the most power in the world to influence global events. Time calls Putin “the new Tsar,” saying that although he doesn’t care about civil liberties he has brought stability (Capricorn) to a country that desperately needed it after the fall of Communism resulted in a chaotic political and economic system. (See my astrological articles about Putin here and here.)

This could be a harbinger of what we can expect with Pluto in Capricorn: a shift in power (Pluto) structures (Capricorn). Pluto’s last venture into Capricorn marked the beginning of a new loci of world power in the New World. Ever since then, the United States has grown in the kind of power that Pluto traffics in: military power, economic power, the power to influence endings and new beginnings for all other nations.

There is little doubt that now, as we enter the current Pluto in Capricorn period, the US is losing much of that influence in the global arena and thanks to the war in Iraq has lost the respect it once commanded. Russia has a long history of a strong alliance with China, the most powerful developing nation in the world, that continues to this day and I wonder whether the shift in power over the next thirteen years of Pluto in Cap could lead to the ascendancy of the Russian/China alliance. If Russia and China become more powerful, it would bring about a total global shift towards Asia as their other allies such as Tehran and Sudan get a ride on the coattails. India has expressed an interest in […] 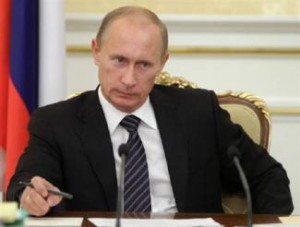 In yesterday’s post I reviewed the reasoning behind the various charts for “modern Russia,” the nation that emerged after the fall of the Soviet Union. The one I have selected is the chart from the declaration of independence by the Russian Federation.

That quiet Virgoan strategy is offset somewhat by the placement of Mars, denoting the aggressive instincts of the nation, in its own sign of Aries and in the seventh house of […]

Putin and Bush on the eve of the G-8

Vladimir Putin is kind of a creepy character to me, a quality not usually associated with his Libra Sun since Libras are famously charming and people pleasers. But a look at his birthchart tells a more complete story.

Putin’s four Libra planets (Sun, Saturn, Neptune and Mercury) are all in the twelfth house of karma or self-undoing. Planets in the twelfth house tend to operate unconsciously and often secretively. Twelfth house people tend to be hidden not only from others but from themselves as well; much of their motivation and will tends to operate below the surface where it is difficult for them to access. The Libra stellium, particularly the conjunction of Saturn and Neptune, is squared by Uranus, planet of revolutionary fervor and individuality.

The conjunction of Saturn and Neptune in the birthchart creates an inner conflict between the desire to experience spiritual bliss (Neptune) and a desire for worldly achievement and structure. When the conjunction of these two planets is squared by the radical influence of Uranus there is a tendency to swing wildly between the repression of Saturn and the desire for freedom of Uranus. Putin appears to have chosen the side of repression and rigidity, but within him beats the heart of a revolutionary that refuses to take orders from anyone else.

The chart shows Scorpio rising (although the birthtime is somewhat suspect since Russians did not keep accurate records) which can give the outward impression of an intense personality even though the individual himself may not have that impression of himself. Though secretive, the rest of Putin’s chart is somewhat light with Mars in Sagittarius and so much Libra. The creepiness of his intensity could be a part of the ascendant disguise that he has learned to utilize for his benefit.