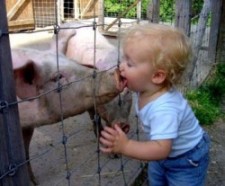 Evidently I’m not completely crazy.  My research uncovered this lost news story from back in February which reported that Baxter International […]