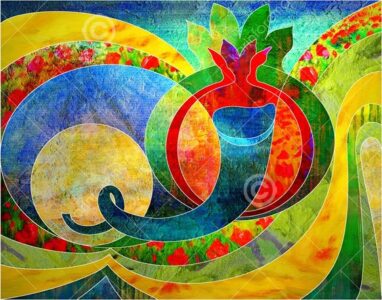 The correlations between astrology and religion has always fascinated me. Religion denigrates astrology as fortunetelling, but also utilizes it to date all important holidays.  A portion of this article was posted back in the mists of the history of this blog, but it is still fascinating to me.  Back in 2010 an article from Gahl Eden Sasson in Huffpost offered this fascinating connection between Rosh Hashanah and astrology:

According to rabbinical lore, Adam and  Eve, our primal parents, were created on Rosh Hashanah, which traditionally falls on the New Moon of the seventh month (see quote above). A closer look at the biblical text reveals that God did not only create Adam and Eve on the sixth day, but also gave birth to the concept of relationships. Friday, Veneris in Latin, named after Venus, is the day Adam and Eve were born. The fact we were created under the influence of a benevolent planet is a reassurance that we cannot be that bad after all.

Since the biblical and zodiac year begins in Aries, then Libra, the seventh sign is the month mentioned in Leviticus. Libra, ruled by Venus, is the sign of relationship, marriage and contracts. The fact that our common ancestors, Adam and Eve, were created on a New Moon in Libra is a great sign for all of our relationships. It means that embedded in our mythological “DNA” is the potential of having harmonious and balanced relationships. To this affect, at least according to Astrology and the Bible, we are innately good.

On Rosh Hashanah it is a custom to blow the Shofar, the ram’s horn. This ancient ritual is multi-layered and carries a great deal of symbolism. The Ram is associated with Aries, the sign that begins the biblical as well as Astrological New Year. On the zodiac wheel, Aries is located opposite Libra. Together they create the first set of opposing signs. You can say that Aries (ruled by Mars, the archetype of Adam) falls in love with Libra (ruled by Venus, the archetype of Eve) on Rosh Hashanah.

The symbolism of the New Moon of the Seventh Month goes even deeper considering the fact that Rosh Hashanah is celebrated precisely halfway through the zodiac. With six signs before and six signs after, Rosh Hashanah is a watershed of energies. According to astrology the year is divided into two main parts. The first half stretches from spring to the end of summer and is masculine and active, while the second half stretches from fall to the end of winter and is feminine and receptive. The borderline between these two halves is the Fall Equinox when the day and night, the masculine and feminine, are equal and balanced. That is the mythos-logic of having the Fall Equinox mark the beginning of the sign Libra, the sign of the scales. This year the Equinox takes place on September 22, a few days past Rosh Hashanah. Astrology asserts that in the masculine extrovert part of the year, which is now coming to a close, humanity is busy acting, doing, building, sawing, reaping, working, collecting and creating. During the feminine introvert part of the year, we are focused more on assessing, reevaluating, deepening, editing, processing, dreaming, healing and assimilating everything we have done in the active part of the year.

Read more here, including an explanation of the place that Saturn, Lord of Karma, has in this celebration of the Jewish New Year.  It’s occurred to me in the past that the Jewish religion is very Saturn-based, with its focus on doing the right thing and honoring your obligations, whereas Christianity is more Jupiter-based in some ways – at least in its original form.  Turning the other cheek, kindness and compassion, these are all Piscean qualities under the Jupiter rulership.  Judaism actually took hold in the Age of Aries, ruled by Mars, when wars to establish dominance included a push towards monotheism, but that’s a story for another time.

This year Rosh Hashanah falls on September 6-8, and I want to wish all of my friends Shanah Tovah, and a good year – a better one, anyway!