A portion of this article was posted in 2011. 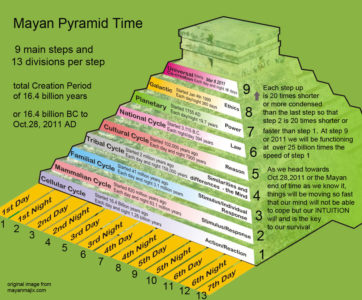 The Mayan calendar is usually said to end on December 21, 2012, but that date seems to have little relevance to the actual Mayan calendar, although it has come to bear great mythological significance for the current age.  According to that great source of modern wisdom Wikipedia:

In 1975, the ending of b’ak’tun 13 became the subject of speculation by several New Age authors, who asserted it would correspond with a global “transformation of consciousness”. In Mexico Mystique: The Coming Sixth Age of Consciousness, Frank Waters tied Coe’s original date of December 24, 2011,[d] to astrology and the prophecies of the Hopi,[42] while both José Argüelles (in The Transformative Vision)[43] and Terence McKenna (in The Invisible Landscape)[44][45] discussed the significance of the year 2012, but not a specific day. It was only in 1983, with the publication of Robert J. Sharer‘s revised table of date correlations in the 4th edition of Morley’s The Ancient Maya,[d] that each became convinced that December 21, 2012, had significant meaning. By 1987, the year in which he organized the Harmonic Convergence event, Arguelles was using the date December 21, 2012 in The Mayan Factor: Path Beyond Technology.[46][47] He claimed that on August 13, 3113 BC the Earth began a passage through a “galactic synchronization beam” that emanated from the center of our galaxy, that it would pass through this beam during a period of 5200 tuns (Maya cycles of 360-days each), and that this beam would result in “total synchronization” and “galactic entrainment” of individuals “plugged into the Earth’s electromagnetic battery” by 13.0.0.0.0 (December 21, 2012). He believed that the Maya aligned their calendar to correspond to this phenomenon.[48] Aveni has dismissed all of these ideas.[49]

What do the Mayans say?

There’s something romantic and thrilling about the end of the world occurring on the Winter Solstice, but some scholars debate the date of December 21, 2012 as the true end of the Mayan calendar.  For example, Alejandro Cirilo Perez Oxlaj, the 13th generation Quiche Mayan High Priest, and a Grand Elder of the Continental Council of Elders and Spiritual Guides of the Americas, said last year:

We don’t know exactly if it is going to be 2012 or if it is going to be later on. Because 2012 is a Gregorian date, sometimes it does not coincide with the Mayan calendar. There are many reasons why we don’t know exactly the timing. It has to do [with] when the invasion came, a little over 500 years ago [Spanish Conquistador invasion], the [Mayan] men and women of wisdom were the first ones to be assassinated. Then Bishop Diego de Landa, during the invasion, gathered all the books where all the information was, and they set them on fire. So they burned all the information. … The calendar that was at that time in effect, they have gone through so many modifications. . . Like in this Mayan council, they left out days; they didn’t count just to catch up with time. Then with the Gregorian Calendar, all the months are so irregular in length, like the months of 28 days, 30 days, 29 days, 31 days. So this is why it doesn’t [align]. But one thing is for sure, it is certain that you all will know when this happens, because it is going to be a long period of darkness. It is a change of sun; it is another sun that is coming. So, like now, we see the north, and in the other time, it will [be] a different direction.

In any case, the LibraRising website has a wonderful depiction of the Mayan calendar (shown above)  that is clearer than any other I have seen, outlining all of the larger cycles and the breakdown into smaller cycles.  This article is a bit on the New Agey side, but one interesting aspect to this depiction of the cycles is the fact that the first cycles are extremely long in duration, and as humanity evolves the cycles of evolution become shorter and shorter, reflecting what we have actually seen in the progression of human consciousness and civilization.

What about the astrology?

Most astrologers agree that there is very little of significance in the chart of the 2012 Winter Solstice (shown here in GMT).  The biggest aspect we have been able to come up with is an exact YOD formation (not depicted on this chart) involving a sextile between Saturn and Pluto which is quincunx Jupiter, all within a degree.  A quincunx (150 degree) aspect creates tension with no possibility of resolution.  There is a sense of being stuck and uncomfortable and a need to find an adjustment in order to achieve release.  The harmonious sextile helps to lubricate that difficulty and bring out the best of the focal planet that is under pressure.  In this case that planet is Jupiter, and it is pressured by Saturn and Pluto.

This is an interesting aspect, but not one that in my view would cause the end of the world or even a major shift of consciousness.  The Yod does require a certain amount of letting go so that the requirement adjustment can occur, and this could facilitate the continuing transformation of the square from Uranus to Pluto that requires a release of the past (Pluto) and a transition into a new energy (Uranus).