The astrology of Alexander McQueen
Embed from Getty Images 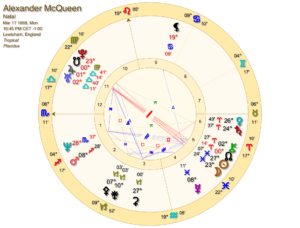 In any case, McQueen was born under the Pisces Sun, and his Moon was also in Pisces.  This was not a New Moon since the Moon was slightly behind the Sun where it is in the balsamic, or Dark Moon phase – a closing of the karmic cycle that requires lessons to be learned and a type of completion.  That this path was to be a difficult one is shown by the exact opposition of Pluto, planet of power and transformation, to the Moon and within orb of opposing the Sun as well.  This kind of placement of Pluto often identifies an individual who has had severe challenge in life and there is a requirement to let go of old personas and continually reinvent oneself in order to grow and evolve.  McQueen told close friends that he had been raped as a child, a trauma from which he never recovered.

His talent was indisputable: A harmonious trine from Neptune (transcendence) to the Moon/Sun conjunction heightened his creativity and enhanced his inspiration.  Jupiter (abundance and opportunity) in the chart was in Libra, the sign of beauty and relationship and it appears that McQueen craved partnership throughout his life, unsuccessfully for the most part.  Venus, planet of love, was in the independent warrior sign of Aries which does not make relationships easy, and Venus was conjoined by Saturn with all of its tests and challenges.   But a conjunction of Uranus (radical behavior and rebellion) to Jupiter in Libra reveals an iconoclastic personality who sought to burst through conventional ideas of love and beauty (Libra).

Mars is the planet that describes desire and the personal Will, and his chart had Mars in the optimistic and happy-go-lucky sign of Sagittarius.  All of this Pluto and possibly Scorpio and Saturn energies are not happy companions to Sagittarius which seeks only to find truth and goodness in life.  McQueen was quoted as saying “I oscillate between life and death, happiness and sadness, good and evil” which reflects this basic dichotomy in his personality.

There is a challenging planetary cycle of Pluto which arrives for every human approximately between age 36 and 40, when Pluto in the sky forms a challenging square (90 degree) formation to Pluto in the natal chart.  This cycle, called the “Pluto Square,” can denote a period of great challenge and loss but ultimately major transformation. When Pluto is intimately connected with sensitive points in the chart this period becomes more difficult and that was the case for McQueen.

Biographies of McQueen claim that he made several suicide attempts in the years before his final successful attempt in 2010 which correspond to the period between 2005 and 2010 when transiting Pluto was setting off that sensitive system in his chart.  During those years he also lost Isabella Blow, one of his closest friends from whom he had become estranged, and his beloved mother became terminally ill and died just before his suicide in February 2010.

It’s not uncommon to find transits of Jupiter at the time of death.  Jupiter is the planet of liberation after all, and Jupiter cycles also bestow confidence which may otherwise be lacking.  At the time of McQueen’s death Jupiter made a challenging square to Mars in his chart which can exacerbate one’s drive (Mars) while expanding one’s confidence (Jupiter).

Obviously not everyone with this chart would be driven to the kind of extreme experiences that McQueen encountered.  While the facts of the chart remain the same for everyone who shares it, the specific experiences and choices of each individual life are completely unique to each one of us.