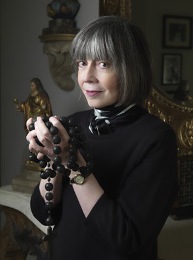 Rice (October 4, 1941, New Orleans, time unknown) has a conjunction of Saturn to Chiron in her birthchart.  This is a dramatic combination of planets that often suggests that the native will undergo a series of painful (Chiron) events in their life in order to achieve deep and lasting personal transformation (Pluto).  Certainly this is true for Anne Rice: she lost her young daughter to leukemia in 1972 when Pluto (death and transformation) opposed her Moon (archetype of the mother and emotional nurturing).

Mercury is the planet that governs the manner in which we communicate and process information mentally, and in Rice’s chart Mercury is in Scorpio and in a challenging square to the Chiron/Pluto combination.  This is a Mercury/Pluto “double whammy” because Scorpio is ruled by Pluto and here we have Mercury in Scorpio, ruled by Pluto, in a square to Pluto (along with Chiron).  It’s no wonder that her writings (Mercury) have been a walk on the dark side (Pluto/Scorpio).  This combination also suggests that she thinks (Mercury) deeply (Pluto) about everything, and with her courageous Aries Moon she isn’t afraid of controversy or scandal.

All of this depth and intensity belies the Libra Sun, demonstrating that although the Sun is the biggest single element of the birthchart it is only one piece.   The Libra Sun seeks balance and harmony, but in Rice’s case that search comes in the midst of intensity (Pluto/Scorpio) and an intense personal journey (Chiron/Pluto).

Rice also has a conjunction of Saturn to Uranus in her chart.  (Geeky astrological detail: with Saturn at 28 Taurus and Uranus at 0 Gemini this is an “out of sign” conjunction and two degrees is about as big an orb as I’ll allow so this squeezes in there.) The Saturn/Uranus combination in any chart creates stress between conventionality (Saturn) and individuality (Uranus), and often these individuals vacillate between a desire to be a part of society with all of its trappings (Saturn) and a desire to flout convention and follow a more unique expression of one’s life (Uranus).

Neptune, the planet of spirituality and mysticism, forms a trine to the Saturn/Uranus combination which strengthens the spiritual component of the life and necessitates a direct experience of God and not just a theological one.  Neptune is in a challenging square to Jupiter, the planet that represents religion (in the sense that religion is a codification of our sense of what gives life meaning).

The Jupiter/Neptune square suggests an inner conflict between one’s personal theology (Jupiter) and spiritual experience (Neptune).  We see this mirrored in Rice’s own writings when she says “In the moment of surrender, I let go of all the theological or social questions which had kept me from [God] for countless years. I simply let them go.”  Called out of Darkness, 2008.

At the time that Rice returned to Christianity in 1998, after nearly 40 years as an atheist, occurred as transiting Pluto conjoined her progressed Sun and transiting Uranus was trine her natal Sun.  Because the Sun represents the “Self,” the quintessential being that we are apart from personality and the trappings of society, it’s no wonder that these two major planetary cycles a major change in the way in which she saw herself.  She also at that time slipped into a diabetic coma and was diagnosed with Type 1 diabetes as Uranus (shocking change) opposed the Chiron/Pluto conjunction in her chart, revealing the illness (Chiron) that threatened her life (Pluto).

In 2004 she announced in a Newsweek article that she would write “only for the Lord.”  At the time transiting Pluto was opposing her natal Jupiter (religious theology), perhaps creating a sense of urgency within her regarding her own religious expression.  She had just lost over 100 pounds after gastric bypass surgery following the death of her husband, and transiting Pluto has a tendency to help us shed old skins that no longer fit us, just like the snake that is one of Pluto’s symbols.

We don’t know exactly where Anne Rice’s Moon lies in her chart because no birth time is available , but it is somewhere between 28 degrees Pisces and 10 degrees Aries so her Moon has likely been affected by the Cardinal Drama that has been in play astrologically since May of this year when Uranus entered Aries.

Rice has also been undergoing a multitude of planetary cycles to Saturn that tend to help us to define our lives:  Jupiter square Saturn, Chiron square Saturn, Neptune square Saturn, Uranus sextile Saturn, Saturn trine Saturn.  There is a sense that she is reaching out for stability and something real to underlie the religious conflicts that keep taking her in and out of a deeper spiritual connection.

It appears that Rice is now moving towards the Neptunian influence of a transcendent and personal experience and away from the Jupiterian dogmatic adherence to theology:

“I believed for a long time that the differences – the quarrels among Christians – didn’t matter a lot for the individual. That you live your life and stay out of it,” she wrote.

“But then I began to realise it wasn’t easy to do … I came to the conclusion that if I didn’t make this declaration, I was going to lose my mind.

“In the name of Christ, I quit Christianity and being Christian. Amen.”

She said she would continue to be “an optimistic believer in a universe created and sustained by a loving God”.