The astrology of Brett Kavanaugh
Embed from Getty Images

1965 was a difficult year in which to be born.  Uranus (disruption) and Pluto (destruction) were in conjunction, setting off the radical social experiment that we now call “The Sixties.”  Chiron, the planet of wounding and healing, was in a tense opposition to the Uranus/Pluto combo.  This planetary dynamic alone can be difficult for an individual –  Chiron/Uranus creates a tense energetic misalignment that can evoke anxiety and disturbance, and Chiron/Pluto generally suggests an emotionally sensitive individual whose wounds are close to the surface. 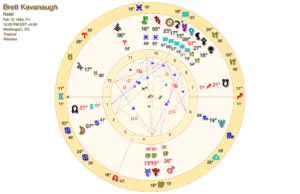 The Chiron/Uranus/Pluto system was in effect between 1962 and 1968, but in 1965 and 1966 Saturn joined the party and intensified the pressure for those old soul wounds to emerge and be healed.  This doesn’t mean these people are doomed to failure: Some well known individuals born in 1965 and 1966 with early difficulties later experienced great accomplishment.  But the emotional and spiritual pressures can be quite a challenge.

In any case, this emotional stress can be destabilizing for someone with three planets in Aquarius, who is more comfortable with a lower degree of emotionality.  Combine this with a Cancerian Moon, which is highly emotional and sensitive, and we have an individual who likely wrestles with his feelings and finds ways to neutralize them.  It’s not surprising, with Neptune in a challenging square to the Aquarius planets, that drinking would play a role in this.

Jupiter also plays a role in Kavanaugh’s chart.  As king of the gods, Jupiter’s role in the chart is to show where an individual will find meaning in life but when it is conflicted as it is in Kavanaugh’s chart, in a challenging opposition to Neptune and squaring the Aquarian planets, Jupiter can add a self-righteous and entitled tone to the chart.  Jupiter is also associated with the judicial system and the law, so it’s not surprising that Kavanaugh selected the law as his profession.  Transiting Jupiter is setting off the Neptune square Sun system in his chart right now, which just goes to show that Jupiter transits aren’t always fluffy signs of good fortune.  In Kavanaugh’s case Jupiter transits can serve to bring out the innate confidence/arrogance of the natal Jupiter system.

It’s also not surprising that the Black Moon Lilith, representing female power and rage, is conjunct Kavanaugh’s Venus.  The Black Moon Lilith has emerged as an astrological symbol for the MeToo movement, and is present in the chart of most of the major players.

Kavanaugh’s Mars is in the modest sign of Virgo and it makes no major aspects to any other planets.  It does form a quincunx, an awkward aspect which applies tension with no way to release it, to his Sun which could manifest in a gradual buildup of unexpressed anger that explodes at odd times.  In addition, his Mars is retrograde which makes it that much more difficult to express.  Mars in Virgo does not easily show anger which suggests that his emotional outburst at the hearing this week was an anomaly due to the pressure of the situation rather than the norm.  I believe he likely expends a great deal of energy keeping his emotions in check but there is no fire in his chart which would facilitate the expression of anger.  This is a karmic placement:  Mars forms a challenging square to the nodes of the Moon which point to our past and our future.

I suspect that in his early years Kavanaugh used alcohol to amp up his confidence.  I believe that with the Chiron sensitivity combined with the Neptune square, and no fire in his chart, surrounded by jocks and male bonding, he would have felt a supreme lack of self-confidence which he medicated with alcohol.  College classmates describe him as having been belligerent when drunk which fits with my theory.  Recently Kavanaugh stated that he was a virgin through high school and for quite a few years afterwards, and this article makes a good argument:

For what it’s worth, and absent evidence or allegations to the contrary, I believe Brett Kavanaugh’s claim that he was a virgin through his teens. I believe it in part because it squares with some of the oddities I’ve had a hard time understanding about his alleged behavior: namely, that both allegations are strikingly different from other high-profile stories the past year, most of which feature a man and a woman alone. And yet both the Kavanaugh accusations share certain features: There is no penetrative sex, there are always male onlookers, and, most importantly, there’s laughter. In each case the other men—not the woman—seem to be Kavanaugh’s true intended audience. …

One thing we’ve learned about Kavanaugh, then, is that he perpetually overshoots. To put it bluntly, he lies. Rather than admit he was flawed, or made some mistakes he regrets, or simply acknowledge that different people might have seen him differently—as they demonstrably did—he’s doubling down on an unsustainable and untrue account of himself and his reputation.

I’m not sure what kind of details the FBI investigation will turn up regarding these allegations.  But I can’t help feeling that no matter what is revealed in this investigation, an individual who is so desperate for the approval of others in order to develop a sense of personal self-worth is not the kind of person that should be on the Supreme Court.