The astrology of Clarence Thomas
Embed from Getty Images

When I have a session with a new client, I like the astrology to speak for itself. I never Google the client, or look at their website when they send me a link. Rather than try to fit the astrology into my idea of who the person is, I would rather see what the astrology says since my view may be flawed. That process is more difficult when doing a profile for a public person. We see their actions, and we have an opinion about them. And while I try to remain neutral in these profiles my bias will sometimes leak into the astrological information. This post is about Clarence Thomas as a human being and is not meant to be an endorsement of his political influence.

Clarence Thomas has a fascinating biography. He was born into a poor Gullah community (descendants of slaves who have lived relatively intact in the sea communities of Georgia and South Carolina since post-slavery times) and went on to attend Yale law school and sit on the highest court of the land.

(Thanks as always to Astro.com for hunting down accurate birth information.) Thomas was born with the Sun in Cancer, the sign of deep feelings and love of family. Cancerians tend to have a strong sense of history and connection to community. Thomas’s Sun conjoins Mercury, planet of the mind, which always suggests an individual of high intelligence; however, when the planet of the mind is in the sign of feelings, there is an emotionality in thought and communication that is not always helpful. The Sun/Mercury pairing includes the addition of Venus (relating) – a Cancerian stellium of deep sentimentality and like the crab it symbolizes, a rough outer shell which hides a well of emotion and vulnerability. 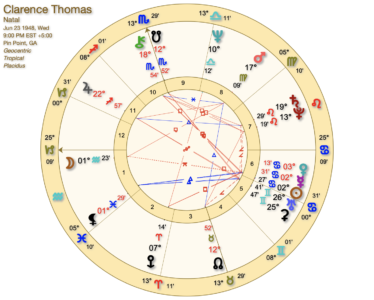 Capricorn, Cancer’s polarity, is rising in the chart – where Cancer is steeped in that deep emotionality, Capricorn teaches us to forget about our feelings and do the things that have to be done. In modern parlance, to put on our big boy pants and do the Thing.  Where the Cancer Sun reveals the essence of the man, the Capricorn ascendant describes the way we see him.

The emotions of Cancer can be difficult for a man who until recently was taught that feelings aren’t manly and achievement is the ultimate goal. That would be especially true for someone with Thomas’s background who fought his way through racism and prejudice into Yale law school and the Supreme Court. And it’s also especially true for someone with an Aquarius Moon as Thomas has. Saturn rules the Capricorn ascendant, and Saturn also rules his Aquarius Moon. A strong Saturn can make for a lonely life, but it can also teach endurance and the blessing of success. However, for a chart like this that success can come at the cost of emotional freedom.

All of this is exacerbated by a difficult Saturn placement in the chart. Saturn, planet of self-doubt, is in Leo, the sign of the Self, which often suggests a person who denigrates his own need for recognition and self-regard for the sake of others. Saturn conjoins Pluto, planet of fate and power, and both planets are in the seventh house of partnership. If you’ve read anything about Ginni Thomas this may help to explain some things about their marriage as she is a very strong and driving personality. Sadly though, Chiron (wounding and healing) is locked in a challenging square to both Saturn and Pluto, a very difficult planetary aspect that reveals deep seated wounds and emotional scars that require a great deal of introspection and willingness to face traumatic emotions in order to heal.

Fortunately for Thomas he has a strong Jupiter placement in its own sign of Sagittarius, bringing abundant good fortune and positivity through the eleventh house of associations and social connections. Jupiter opposes Uranus, planet of rebellion, indicating a strongly independent streak that belies the strict fundamentalism of the powerful Saturn influence.

Many pages could be written about this chart, but to keep it succinct so I don’t lose too many of you I’d like to end with this quote from fellow justice Sonia Sotomayor in a speech on June 19, 2022. This is an unexpected side of Clarence Thomas that we don’t often see in the news, but which we can see revealed in the astrological chart.

I suspect I have probably disagreed with him more than with any other justice, that we have not joined each other’s opinions more than anybody else. And yet Justice [Clarence] Thomas is the one justice in the building that literally knows every employee’s name. Every one of them. And not only does he know their names, he remembers their families’ names and histories. He’s the first one who will go up to someone, when you’re walking with him, and say, “Is your son OK? How’s your daughter doing in college?” He’s the first one that when my stepfather died sent me flowers in Florida. He is a man who keeps cares deeply about the court as an institution, about the people who work there, but about people. . . . You really can’t begin to understand an adversary unless you step away from looking at their views as motivated in bad faith, but until you can look at their views and think about what the human reaction is that’s motivating those views.