Although this is a political post, I am attempting to keep it free from bias on my end.  Please do the same in the comments!  This is an astrological blog and here we look at the astrology behind the politics rather than the politics themselves.  There are plenty of other places for those discussions.

Elizabeth Warren is currently polling at #4 in the long list of Democratic candidates for the presidency, and she is #3 in my series of profiles (actually, Harris is now polling at #3, we’ll look at Harris next).  See also Joe Biden and Bernie Sanders, profiled in these pages.

Elizabeth Warren has a long academic history and was a debate champion in high school. Her childhood was apparently marked by economic deprivation, going to work at the age of 13 to help her family pay medical bills from her father’s illness. After graduating from law school she specialized in bankruptcy law and has a longtime interest in families who undergo bankruptcy due to economic hardship. 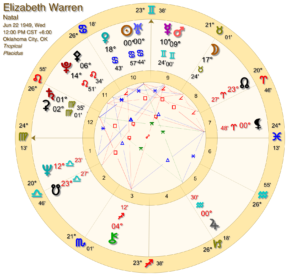 The astrological chart for Elizabeth Warren (born June 22, 1949 in Oklahoma, no birth time available) shows that she has the Sun in Cancer, the sign of emotional sensitivity and nurturing.  One thing I have noticed about Cancer Sun people is that they CARE – about everything.  Everyone’s suffering becomes particularly poignant and personal for people with a strong Cancerian element in their chart, and Warren also has Venus (relating) in Cancer which intensifies this even more.  That said, her Sun is very tightly conjunct Uranus, the planet of rebellion and change.  She is a visionary and has an eye for outmoded patterns and institutions which are no longer working, and a desire to create change to improve situations rather than just follow the traditional path.

Her Moon is in the stable sign of Taurus, so there is a part of her that craves the security of a life that is predictable.  But there is just as much in her chart that suggests change, including Mars, the action planet, in the fluid sign of Gemini.  Mars in Gemini is never really happy doing the same thing for long periods of time – it craves experience and change.  The fact that it conjoins Mercury (mind and communication) which is also in Gemini amplifies this need for change, as well as confers the somewhat combative style of communication which made Warren a debate champion in her younger years and has served her well in the senate.

Warren can be intense, as indicated by the challenging square of Pluto (destruction and regeneration) to her Moon, and a challenging square between Saturn (tests and challenges) and Chiron (wounding and healing) suggest some emotional damage that has required healing over the years.  We also see the Black Moon Lilith in an exact square to her Sun/Uranus combination.  The Black Moon Lilith is a significator of primal rage, especially against the patriarchal system, and some commentators (and Warren Buffett) have expressed concern over Warren’s anger.  The Sun/Uranus conjunction, together with Jupiter (expansion and ideals) in the sign of Aquarius, standing for social justice, seems to incorporate that internal demand for equality of the BML into the very fabric of her ideals, and the Pluto/Moon square intensifies her emotionality even as the Mercury/Mars in Gemini seeks greater objectivity.

Much has been written about Warren’s missteps in claiming Native American ancestry, and I will leave it to this article to explain how that family legend came to be.  Gemini famously embraces a flexibility with the truth, and Warren’s Mercury/Mars in Gemini may tend to be less than completely accurate with facts in order to prove a point.  But the other chart factors, particularly the idealism of Sun/Uranus and Jupiter in Aquarius, mitigate that tendency and are a strong proponent for truth and justice.

Warren has has a nice trine (harmonious aspect) from Jupiter (good fortune and expansion) to Pluto in her chart since January, and later this year when Jupiter moves into Capricorn it will oppose her Sun and Venus, continuing to expand her confidence and sense of purpose.  However, Saturn (restriction and limitation) is opposite her Venus (attraction and relationships) for most of 2019 which could suggest difficulty in creating a real connection with the public.

Warning: geeky astrological details in this paragraph.  The synastry (comparison) between Warren’s chart and the US chart is pretty positive.  Her Sun/Uranus conjunction sits right on the Venus/Jupiter conjunction in the seventh house (partnership) of the US chart suggesting an affinity for the goals of the country.  Her Mercury/Mars conjunction sits right on Uranus in the US chart, helping to stimulate the desire for change.  However, there are no close connections to the US Moon, representing the heart and soul of the nation, other than a few out of sign aspects.  This is a cerebral connection rather than an emotional one.

I’m unclear on Warren’s chances because of this cerebral connection.  She may be the candidate that makes sense, but there may be another candidate with more of an emotional impact that ends up winning the nomination.