The Astrology Of Henry Paulson

The Astrology Of Henry Paulson 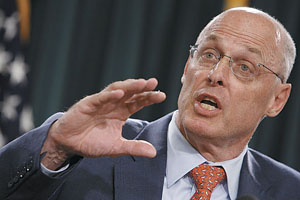 Financial astrologer Ray Merriman said last week in our workshop that Aries Henry Paulson and Sagittarian Ben Bernanke did a fine job during the big expansion of the Pluto in Sagittarius era, but that they don’t have a clue how to deal with the contraction of Pluto in Capricorn.  This is an interesting point, but the chart of Henry Paulson (3/28/1946, Palm Beach Florida, time unknown) is even more interesting in light of the current financial debacle.

Paulson’s Aries Sun is exactly opposed by Neptune, describing someone whose Aries dynamism is obscured by the mists of Neptunian compassion and spirituality.  Paulson, former CEO of Goldman Sachs, is also one of the largest donors to environmental causes and he is a dedicated Christian Scientist.  Mercury in his chart is conjunct his Sun, indicator of extreme intelligence, and therefore also opposed by Neptune.  Moreover, Mercury is retrograde in his chart which suggests that he finds it difficult to feel that he has made his views understood; combined with the opposition to Neptune this is a challenging aspect for communication skills.  Still, Paulson has achieved great success despite these odds, possibly thanks to a Grand Trine in air planets that includes a trine from Neptune to Uranus, facilitating the flow of information (Uranus/air) in a creative and flowing way (Neptune).

However, Paulson has an impetuous side as shown by a square of retrograde Jupiter to Mars in his chart.  Jupiter is expansive and seeks to aggrandize the other planet in a challenging aspect like the square, and Mars, being our impulse and drive, can become reckless and impulsive when squared by Jupiter.  Saturn conjuncts Paulson’s Mars and squares Jupiter, putting somewhat of a damper on this impulse and giving him the discipline to have achieved his goals, but his tendency will always be to act first and think about it later. The New York Times quotes Allan Hubbard, his colleague in the Bush administration, saying “Hank is just the most hyperactive, get-it-done kind of guy who’s always trying to get the problem solved and move on. He’s impatient to fix things,”

Paulson’s Moon is in the rational sign of Aquarius and is part of the Grand Trine in air, which can sometimes get so caught up in the realm of ideas that there is a failure to see the reality on the ground.  The only water in his chart, showing his emotions and sensitivity, is his Mars in Cancer which reveals the tendency to act (Mars) based on emotions (Cancer) which can be a detriment in a crisis such as the one we find ourselves in now.

Paulson’s strong Aries nature and the square of Mars, his Sun’s ruler, to Jupiter shows that he is fiercely drawn to freedom and a lack of restrictions.  The lifelong presence of Saturn on his Mars, especially square to Jupiter, as likely led him to resent rules and restrictions that feel confining and oppressive.  This is reflected in his economic philosophy: “An open, competitive, and liberalized financial market can effectively allocate scarce resources in a manner that promotes stability and prosperity far better than governmental intervention.”

That may have been true during the realm of Pluto in Sagittarius, but the Pluto in Capricorn era demands something quite different:  structure, discipline, and the bursting of the Sagittarian bubble.