The astrology of Israel and sudden violence in Gaza

The astrology of Israel and sudden violence in Gaza 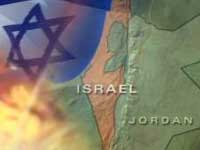 Last night Israeli forces stormed into southern Gaza, attacking three bridges and knocking out a power plant in an effort to force the release of an Israeli soldier who had been kidnapped by Palestinian militants. Ironically, yesterday Hamas and Fatah (the two Palestinian political factions) came to an agreement on a shared political platform which formally recognizes the State of Israel. It’s doubtful, though, that last night’s attack will secure the peace process.

The astrological chart for Israel (from astrodatabank) shows the Sun in the fixed sign of Taurus in square (challenging aspect) to Mars (warfare and aggression) in Leo. In mundane astrology, the Sun represents the spirit of the nation, and Taurus is focused in security and peace. A fixed sign, Taurus can be stubborn like the Bull by which it is symbolized, and does not easily adapt to the ideas of others. The square of Mars to the Sun shows a combative nature, and Mars in the royal sign of Leo can be arrogant and prideful. Chiron forms a T-square to the Mars/Sun opposition: the Sun is opposed by Chiron (the wounded healer), indicating a persistent healing crisis in the life of the nation that will pressure it to continually align with the truth. In the individual, failure to make this alignment results in chronic disease, and the same can be said of countries. Chiron also makes a square to Mars, indicating that an imbalance of aggression and the failure to create healthy boundaries will lead to great pain.

Four planets fall in Leo in the Israeli chart: Moon, Pluto, Saturn and Mars. Leo is the sign of self-oriented expression, and the Moon in Leo demands appreciation and recognition. Conjunct Pluto as it is in this chart, the Moon is constantly under pressure to prove its worth. The conjunction of Saturn and Pluto is a challenging one in any chart: Saturn strives for stability and practicality, it is the planet that inspires building something lasting. Pluto, on the other hand, demands authenticity and breaks down structures that are not for the highest good. The combination of these two planets generally requires a letting go of our own plans (Saturn) and a willingness to open up to the possibilities of transformation (Pluto). Resistance to this process leads to a constant crisis and breakdown of the structures we work hard to establish.

Israel’s beginning as a state was marked by constant conflict that mirrored this inner complex, and this latest conflict was stimulated by the passage of combative Mars over the Saturn/Pluto combination in the Israeli chart.

Also present in the Israeli chart is the opposition between Uranus (radical ideas and change) to Jupiter (philosophy, meaning, expansion). Uranus is the idealist – the Utopian humanitarian where humans live together in brotherhood. However, Uranus ate his children, and has been known to destroy that which doesn’t fit into his ideals. Jupiter is the philosopher, the ideologue, the creator of theology and shared ideals. When two planets are in challenging aspect to each other, like the opposition, we tend to see the more negative manifestations of these planets, resulting in a self-righteous (Jupiter) desire for Utopia and the willingness to break through and destroy any obstacles in its path.

Currently Israel is undergoing transits to both the Leo planets and the Uranus/Jupiter opposition. Transiting Saturn began passing over the Moon in the chart of Israel last year and is moving into position to hit the Saturn/Pluto conjunction in the chart. The period of July and August will be extremely difficult for Israel as transiting Saturn applies pressure and restrictions on its ability to achieve its objectives.

On a larger scale, transiting Pluto last year began a pass over the natal Jupiter/Uranus combination in the chart of Israel, planting the seeds of transformation that led to Israel’s pullout from Gaza. Pluto is currently retrograding back over this sensitive point and will make a station (appear to stand still) right on the Uranus point of the chart, creating culture wars within Israel (probably resulting from increased military activity from Saturn). Pluto will remain at this point through early November, at which point it will move into position to conjunct Jupiter. This is a long-range planetary cycle that will continue throughout the end of next year.

There is no doubt that we are in a cycle of global transformation and change that is leading up to the Uranus/Pluto square of 2010-2013. However, we cannot allow ourselve to sink into fear. FEAR can be explained as False Evidence Appearing Real, and we need to always step back and look at the bigger picture of what we are really doing here on planet Earth. As individuals we can make tremendous a difference in the world around us just by making small changes in ourselves and our own environment.