This is the first in a series of profiles on the Democratic presidential candidates.  Disclaimer:  While I attempt to be as fair as possible, I do have opinions and they often leak through in this column.  Please take this into consideration when reading this article.

Joe Biden would like to be president.  His first attempt to run back in 1988 was sabotaged by accusations of plagiarism, and his second attempt in 2008 resulted in the election of Barack Obama with Biden achieving the position of Vice President.  Joe (to me he is just Joe, rather than Mr. Biden) was born with four planets in Scorpio which qualifies him as much as any other candidate, since more US presidents have had the Sun in Scorpio than any other astrological sign except for Aquarius, with which it is tied.  Scorpio is the sign that is concerned – ok, obsessed – with power and the wielding of it. 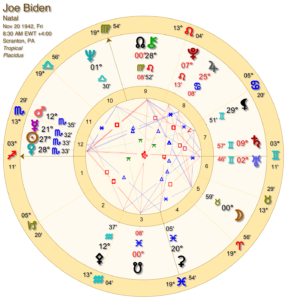 We have a birth time for Joe:  8:30 am, as sourced by astro.com and indicated “from memory” which is not very reliable.  However, that birth time gives us an ascendant or rising sign of Sagittarius which does make sense and reflects Joe’s down home folksiness which is not at all what you would expect from someone with four planets in Scorpio.  He may be easygoing, but make no mistake – he is a fighter, and he wants to win.  With his Moon in stable Taurus, he is stubborn and does not like to back down so he will not give up easily.  His Moon is challenged in a square to Pluto, creating even more intensity and the deprivation of his early life as well as perhaps reflecting the many losses he has suffered (losing his first wife and daughter in a car wreck, followed by the loss of his son to a brain tumor).

Joe’s Jupiter (abundance) is in the family-oriented sign of Cancer – family is what fuels him and drives him, and his Jupiter harmonizes in a trine to his Scorpio planets.  It is this grace card which has likely given him the emotional support to handle the difficult tragedies he has faced.  And Chiron (wounding and healing) is in a challenging square to Joe’s Sun and Venus, affording him the compassion and emotionality for which he is famous.  When he talks to others who have been wounded, his compassion and empathy are genuine.

Joe’s first attempt at a presidential run was quashed in 1987 just as transiting Saturn opposed his natal Saturn – a challenging planetary cycle that can make us face up to our past mistakes.  At the same time he was in the middle of his midlife crisis transits including the Pluto square (a challenge to our personal empowerment which can feel like it’s make or break time) and the Neptune square (confusion can reign during this planetary cycle, and we may be misunderstood or betrayed).  This would have been a very difficult time astrologically, and in fact it was.  Shortly after withdrawing from the race in September 1987 he suffered from a brain aneurysm in February 1988.

Joe is now 76, the same age as Bernie Sanders and older than Donald Trump.  He has just experienced a Progressed New Moon, a rare event that signifies the death of one phase of life and beginning of a new one.  Saturn and Pluto, the planet of structure and the planet of power, are both in a harmonious trine to his Midheaven, the point at which we impact the world.  There is clearly energy in his life for change.  But I suspect that he is deeply ambivalent about the presidency, and during primary election season in March and April of 2020. under the influence of a variety of expansive Jupiter cycles, he may chafe under the restrictions placed on his speech and behavior.  In addition, the synastry (comparison) between Joe’s astrological chart and the chart of the US is not ideal.

I do not believe that Biden will complete the run for the presidency this time.