The astrology of Joe Rogan

The astrology of Joe Rogan 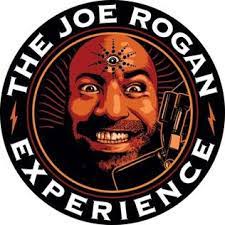 I often like to profile controversial characters in the news as I find them interesting. These profiles should not be construed as being necessarily supportive of the subject’s politics or actions, but they are a useful tool to demonstrate how astrology works in the real world. For that reason I try to be as neutral as possible although I do have opinions and sometimes they leak through.  If you haven’t watched Joe Rogan’s YouTube channel you likely have a very different impression of him than if you have.  If all you read is the headlines, you see a crazy man who embraces conspiracy theories and radical ideas. This is certainly a piece of the man, but if you dive into what he has produced as I have, you see a much more nuanced picture.

Joe Rogan was born with the Sun in Leo conjunct expansive Jupiter – a very fortunate placement which virtually ensures success, especially since these planets are in his 10th house of career and vocation. Leo is the sign of the Self – under the influence of Leo we need to be “seen” and recognized, but also, ultimately, to be the best person we can be.  Aquarius on the Midheaven, a powerful point of vocation and public expression, denotes a detachment and a willingness to consider all points of view  Saturn, planet of hard work and success, forms a harmonious trine to the Sun and Jupiter which helps to facilitate the discipline needed to work towards a goal. The main drive here is for fame and recognition, but there’s more. 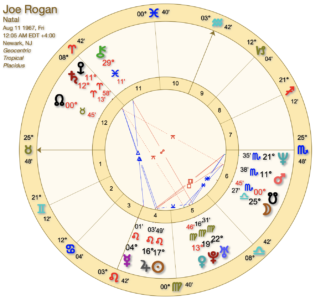 Rogan was born in 1967 at the height of the conjunction of Uranus and Pluto, the planetary formation that brought us “the 60s.”  He narrowly escaped the emotional challenges (Saturn and Chiron opposed Uranus and Pluto) of the 1965-1966 period, so the transformational power of that big conjunction is able to operate freely.  Individuals born under this conjunction (between 1963-1968) generally experience an urgency to bring about a radical (Uranus) transformation (Pluto), and for Rogan this comes through his Aquarian Midheaven and the realm of technology and breaking out of paradigms. His Venus (relating to others) is a part of that conjunction, and his Venus is in the more modest sign of Virgo which would tone down some of the Leo tendency to be bombastic and attention-seeking.

There is a lot of fire in this chart, and fire is the element that promotes passion and enthusiasm. Three planets (plus Ceres) in Leo, and three planets, including Mars, in Scorpio which is one of the Mars-ruled signs. Saturn is in the other Mars-ruled sign, suggesting insecurities and doubts about his masculinity which can lead to overcompensation, especially in one’s younger years.  But Saturn is well placed in a trine to the Sun and Jupiter and also rules the Midheaven which ameliorates some of these difficulties. Still, the impetuosity of the fire element is clearly visible in Rogan’s personality.

We do have a time of birth for Rogan (thank you astro.com!) which shows that Taurus is rising in the chart. The rising sign, or ascendant, shows the way in which we move through the world, and the influence to which we aspire and which we grow into during our lives. Like Libra, Taurus is ruled by Venus and desires peace and equanimity along with material security.

If you watch Rogan’s podcasts you can see that he is genuinely interested in different points of view, even those that are clearly incorrect, reflecting the open-mindedness of the Aquarian midheaven. As we have watched the Coronavirus unfold, we have seen things that were first said to be true later revealed to be false, and vice versa. As an astrologer who practices what some would call “pseudoscience” and “misinformation,” I may be particularly sensitive to the fear of information repression, but as an astrologer I also see the conflict over information as an expected part of the Saturn/Uranus square under which we operated throughout 2021 and which is still in force in 2022.  Both transiting Saturn and Uranus are in difficult aspects to Rogan’s Leo and Scorpio planets right now, so he is at once being pulled to break out of restriction (Uranus) and also being hammered by authority figures (Saturn).  In the  meantime, his fame continues to grow because of controversy, rather than in spite of it.