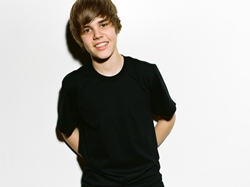 It’s rare that someone with a sensitive Pisces Sun conjoined by repressive and insecure Saturn achieves this kind of fame so early, but Justin has Pluto, the planet of personal empowerment and transformation, in a very tight conjunction to his North Node which signifies his future.   In addition, Jupiter in his chart is in the passionate sign of Scorpio which adds a touch of sex appeal and the innate understanding of how to use it.

Justin’s fame erupted last year under a series of transits to his progressed Sun.  A harmonious transit of Saturn (hard work and achievement) combined with a conjunction of Uranus (sudden change and surprise) stimulated a radical shift in his path that changed his life forever, and then Jupiter (luck and good fortune) came along to open that door of success a little more widely.
Bieber’s fame appears to have come purely from his creative talent rather than a glitzy pop image like some of the other young stars (Lady Gaga, Ke$ha).  Still, the sad tale of Corey Haim is just one story where a young star had too much too soon and squandered his life.  That Saturn on Justin’s Sun can give him the inner reserves and strength to combine work hard with early luck, but it can also kick his butt if he tries to slide on his early good fortune.