The astrology of Kate Hudson and Owen Wilson

The astrology of Kate Hudson and Owen Wilson 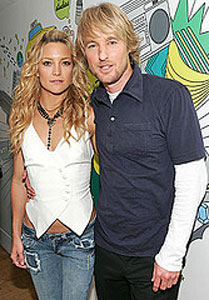 I really like these two together, and I can relate to Owen Wilson’s commitment conflicts and the despair over his failed relationships that put him in the hospital last summer after a failed suicide attempt. So I find myself following their saga with a great deal of interest and sadness. Recently the two had reconciled, and just last week Kate was spotted wearing an engagement ring, but new reports say that they have broken up once again.

Two short months ago, with reports of their reconciliation circulating, I wrote:

Last year when Owen attempted suicide transiting Saturn (the planet which tests us and creates limitations to challenge us and encourage us to become stronger) was in a stressful aspect to the Sun/Neptune conjunction in Owen’s chart. Saturn cycles often bring depression and show us our limitations and where we are not measuring up. Ideally this motivates us to work harder for change and growth, but sometimes it pushes people into despair as we saw with Owen at that time.

Kate has had her own challenging cycles, including a transit of Pluto (death and rebirth) over Venus in her chart (relationships) which witnessed the end of her marriage. She is now going through the famous “Saturn Return,” the time at age 28-30 when Saturn in the sky returns to its place in our birthchart and we are forced to accept the responsibilities of our life and move into adulthood. Kate’s Saturn Return began back in November and she is currently in the second phase now. During the Saturn Return we often crave stability and commitment, and this can be one of the most productive times of our life if we work hard instead of resist the push toward maturity. Other than the Saturn Return, Kate is experiencing some very positive planetary cycles which inspire growth and change and a widening of her perspective.

Owen is also experiencing positive planetary benefits, with Saturn now in a harmonious aspect to Venus in his chart, making it easier for him to focus and increasing his interest in commitment. Saturn, being the planet of discipline and responsibility, inspires us to work harder at whatever we are doing and in aspect to Venus that work is associated with our relationships. He is, however, experiencing a challenging aspect of Pluto to Chiron in his chart. Chiron represents the Wounded Healer, and when activated by another planet, particularly Pluto which brings transformation at the deepest level, it often stimulates our emotional wounds so that we will be motivated to heal rather than seek escape. Owen already survived the first phase of this cycle which began towards the end of December, and the second phase will come this summer. Hopefully he will use this time for healing so that his relationship with Kate can flourish and nurture them both.

Putting this kind of thing behind us, and not dwelling on it, is typical of the combination of the optimism of Sagittarius and the intensity of Scorpio that is the root of Owen Wilson’s noted emotional difficulties. Healing these problems require the strength to face uncomfortable emotions and work through them – they don’t go away, and they fester underneath the surface where they can become infected and later require major psychological surgery to repair.

It’s sad to see something so personal play out in such a public arena, but watching the dramas of celebrities unfold can teach us something valuable about human behavior that we can use in our own lives.