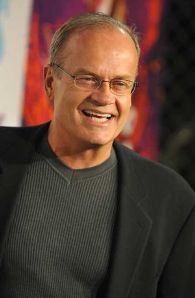 When I was in Woodstock a couple of years ago, I saw a vaguely familiar face walk in the door of a shop.  It took me a few moments to realize that it was Kelsey Grammer.  He was friendly and open, with a big smile.  He has a bit of a “Charlie Brown” look – a nice looking face but one that isn’t memorable for its details.  But I was struck by his pleasant and friendly demeanor.

Mr. Grammer is interested in astrology and psychic phenomena, as he reports in this interview in the Wall Street Journal:

Pisces are called indecisive, but you didn’t have trouble making up your mind about doing a big Broadway show.

My Mars is in Aries.

I don’t know what that means.

My ability to make decisions is actually pretty solid because of that warring planet.

It’s nice to see a celebrity publicizing some of the more detailed facets of astrology rather than just the Sun Sign.  In any case, Mr. Grammer is now embroiled in a new divorce from his third wife Camille and there is speculation that her role in The Real Housewives of Beverly Hills may have played a part in that decision.

Mr. Grammer has a well-publicized history of substance abuse (he began drinking when he was nine) that likely resulted from a tragic family life.  His parents were divorced when he was young, and the second time in his life that he saw his father, he was murdered on the front lawn of the family home.  His sister was raped and murdered in 1975, and his (fraternal) twin brother was killed in a freak accident in 1980.  So he can be forgiven for slipping into escapism from time to time and we wouldn’t necessarily blame that on his Pisces Sun.

While we don’t know exactly where his Moon is because we don’t have a time of birth, Mr. Grammer (born February 21, 1955, St. Thomas VI) has the Moon in Aquarius which tends to process emotions in a rational way through the mind.  His Moon is opposed by Pluto, the planet of death, and squared by Saturn, the planet of loneliness.  Very few people with this kind of system are exposed to the kind of trauma Mr. Grammer has experienced, but there is always a fear (Pluto) and insecurity (Saturn) around emotional issues (Moon) and a lack of a basic sense of security that the Moon normally provides.

The Aquarian Moon prefers to rise above the darker emotions of fear and drama, sometimes resulting in a backup of emotions that have nowhere to be released.  This often results in health problems, as we saw in the profile of Dick Cheney who has an Aquarian Sun and a Pisces Moon which is even more problematic.  Mr. Grammer suffered a heart attack in May 2008 as Saturn, the planet of challenge and tests, made a station opposite his Sun, representing the astrological heart.

It’s not surprising that Mr. Grammer has had difficulty in relationships either.  Not only does the Moon/Pluto system engender fear around intimacy, but Venus in his chart (in reliably solid Capricorn, which does tend to like to settle down in marriage) is opposed by a conjunction of Jupiter and Uranus, the two freedom planets.  His Jupiter in Cancer has a love of family and children, but Uranus is also pressuring him to seek a life that contains more space and more originality.  It’s easy to judge from the outside, but it does appear from Mr. Grammer’s choices that he has been rather superficial in his selections of life partners and this will not in the long run serve his healing journey.

While Mr. Grammer was correct when he revealed that Mars in his chart is in Aries, which is strong and decisive and very much the master of the will, he neglected to add that his Mars is opposed by Neptune which can bleed off some of his energy and focus.  However, a trine from Pluto helps to empower him to achieve his goals and utilize the creativity of Neptune rather than be sapped by the watery planet.

This is a good year astrologically for Mr. Grammer.  He is connecting deeply with his core self under trines of Chiron and Neptune to his natal Neptune, and right around Father’s Day when he and his wife separated transiting Jupiter (good fortune) was in a harmonious trine to Uranus (liberation) in his chart.

This is also a good time for him to heal, with transiting Saturn (focus) in a harmonious trine to natal Chiron (wounding and healing).  It is fortunate for Mr. Grammer that he is a self-reflective individual, because healing the trauma of events such as he has experienced does require a fair amount of emotional courage and attention.