The astrology of Lance Armstrong’s demise

The astrology of Lance Armstrong’s demise 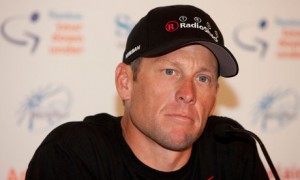 Lance Armstrong was an incredible success story.  He was the second American ever to win the Tour de France bicycle race.  His first win was July 25, 1999 just three years after he recovered from testicular cancer which had spread to his lungs, abdomen and brain.  He won again the following year, and then again for each consecutive year until he retired in 2005.

A Virgo, Armstrong (born 9/18/1971, time unknown, Plano Texas) has four planets in that sign including Mercury and his Moon.  Virgo is concerned with matters of health and healing, and can be meticulous about nutrition and exercise. Lance Armstrong is known in the sporting world for his diligence in training and technique, but rumors of doping and steroid use have dogged him throughout his career.

Pluto conjoins his Sun so the personal transformation that Pluto brings is crucial for Armstrong’s personal development.  Pluto/Sun combinations can bring intense passion combined with an obsession with power dynamics, and often people with these placements have intense experiences which force them to surrender something so that they can become transformed.   But Jupiter, ruling expansion and optimism, is in Sagittarius in his chart which tends to denote an individual whose confidence knows no bounds.  Jupiter conjoins Neptune in his chart, enhancing creativity but also offering the potential for self-delusion.

Armstrong is in the middle of what we call the “midlife crisis transit series.”  Transiting Neptune has begun to form a square to natal Neptune, and with it that overconfident Sagittarian Jupiter.  With Saturn entering Scorpio and pressuring that natal Jupiter/Neptune conjunction to do the responsible thing, the guillotine fell on Armstrong’s career when he was dropped from his lucrative endorsement contracts and resigned as head of the Lance Armstrong Foundation.

Pluto demands that he become all-powerful (just as it did in Michael Jackson’s chart where the pressure to remain on the throne of the King of Pop arguably led to his death), and Jupiter and Neptune whisper in his ear “You SHOULD be king.”  Yet Virgo is a far more modest influence which inspires that we serve others, and Armstrong has been an extremely generous philanthropist. The Phoenix bird, reborn from the ashes of their own self-destruction, is the symbol for Pluto/Sun people.  I predict Lance Armstrong will emerge from this scandal with renewed energy and focus, ready to take his life in a new direction.