The astrology of Michael Bloomberg
Embed from Getty Images

In fact, Bloomberg’s chart has no water signs other than the Cancer ascendant (and the South Node, about which more will come later).  Individuals with no water in their chart sometimes lack empathy and can find it difficult to express or identify with their feelings and emotions, but the ascendant reflects the way that we appear in the world.  Yet the Moon in Aquarius rules the ascendant and therefore a critical element of the chart, showing the importance of integrating the inner world of feelings into Aquarian world of reason. It’s not surprising that Bloomberg is an engineer by training, and someone who possibly sees the world as a series of errors and failures which require fixing.

The Cancer ascendant describes the nurturing quality that gives Bloomberg the semblance of a benevolent dictator.  He cares about the health of the citizenry and wants to take away their giant sodas and their cigarettes and make them start biking to work. And while Cancerian types are generally sensitive and caring people, they can sometimes know better than you do about what’s right for you.  Home is important to Cancerians, and it does seem as though Bloomberg’s only extravagance has been in his homes of which he owns quite a few.  Cancerians love food and feeding people, and Bloomberg’s fundraisers are apparently focused on feeding potential voters.  But most importantly, the Cancerian archetype is about the tribe – the collection of people that we surround ourselves with, and Bloomberg has built a vast network of contacts and friends through his philanthropic work and political ventures. 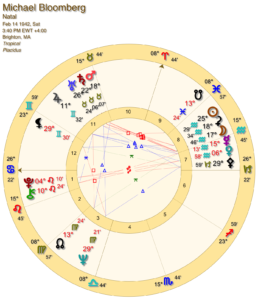 From The Atlantic, “”The problem, for [his opponents], is that he doesn’t care what people think of him. He just wants to do what he thinks is right,” said Hank Sheinkopf, a Democratic strategist and sometime Bloomberg adviser. “This mayor has taken on the gun industry, the tobacco industry, the trans fat industry, whatever that is. He thinks it’s his job to keep people alive, whether people like it or not.””  What a perfect descriptor of the Aquarius Sun with Cancer rising!

Bloomberg isn’t afraid of a good fight, with his Aquarius Sun squared by stubborn Mars in Taurus.  Mars is conjunct both Saturn (hard work and discipline) and Uranus (innovation and technology), all in the 11th house of organizations.  This drive (Mars) for success (Saturn) and technological wizardry (Uranus) in the sign of stable and powerful Taurus is an intense planetary combination for business in the 20th and 21st centuries.  These planets form a challenging square to the Aquarius planets – something which can be a personal challenge, with lots of conflict, but which confers a great deal of personal strength and stability.

Speaking of personal challenges, Bloomberg’s chart is not a great one for personal relationships.  His Venus is in the seventh house of partnership, but in Aquarius it prefers to work autonomously.  In addition, a conjunction of Chiron to Pluto suggests a challenging childhood with a fair amount of emotional pain, and both Chiron and Pluto oppose Venus to create a great deal of pressure and challenge that would take a fair amount of work to overcome.  The fact that he has sustained a 25 year relationship with his current partner as well as a good relationship with his ex-wife and his daughters is impressive considering this difficult Venus configuration, and to me offsets some of the stories about his bad behavior as a bachelor in the early 1990s.

Yes, Mike Bloomberg is rich, but he came from nothing and grew his entire fortune himself.  More importantly, he has spent the bulk of his life giving back to the community.  Not everyone likes him, and it’s true that he’s pumping millions of dollars into his presidential campaign, but it’s hard to argue that anything that he has done in his political life has been to fill his own pocket.

I’m not so sure that looking at Bloomberg’s planetary cycles will give us a clue as to his potential in this year’s election as there are so many other factors at play in this election.  The fact that the US is about to experience a Pluto return in which chaos is likely to ensue.   But let’s take a look anyway.  In 2018 transiting Saturn (hard work and success) formed a challenging square aspect to his Midheaven, the point of highest aspiration and the cusp of the 10th house of vocation. That year Bloomberg re-committed to the Democratic party and began working diligently to promote Democrats in the mid-terms.  I suspect this is when he may have crystallized his desire to run for the presidency himself, but in March of 2019 he announced that he would not seek the nomination. In 2019 he experienced some major harmonious planetary transits (geeky astrological details: a trine from Pluto (transformation) to Saturn (structures and success) and from Saturn to Mars, and then over the summer of 2019 transiting Uranus (radical change) applied pressure in a square to his natal Pluto (crisis and transformation))  just in time for his decision to announce his own candidacy in November 2019 due to his lack of satisfaction with the field of candidates.

Over the next year he does face some challenging planetary cycles along with harmonious cycles to foster ease and promote success.  (Geeky astrological details: Transiting Saturn opposite his ascendant and Uranus triggering his natal Venus/Pluto opposition, potentially creating problems with alliances, but transiting Uranus is sextile Mars to facilitate good energy to create change.)  Still, his natal ascendant is exactly opposite Pluto in the US chart, and will be triggered by the US Pluto return which is an interesting confluence of events that could be significant in his role in how that Pluto Return unfolds.