The astrology of Michelle Bachmann

The astrology of Michelle Bachmann 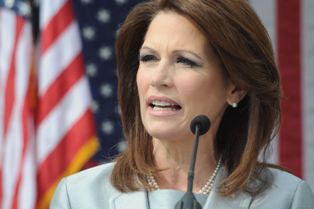 Michelle Bachmann was the winner of the Iowa Straw Poll this week, putting her in the forefront of the pack for the 2012 elections.  It would be a mistake to laugh off her candidacy as a joke.

Ms. Bachmann has given us a birth time, sort of: in this earlier article I wrote about the confusion over whether she was born in the morning or afternoon.  Since we don’t have a confirmation at this point I’m using the 12:08 pm chart which is close to noon and gives us a good approximation of the Moon (middle of the day) if that time isn’t accurate.

Michelle Bachman was born when the Sun was in Aries, the sign of leadership and courage.  The Sun conjoins Mercury, the planet of communication and the mental function.  Many astrologers (especially traditional ones) call this “combust” and believe that the Sun overpowers the other planet, in this case Mercury. I have not seen that to be the case – typically a Sun/Mercury conjunction denotes individuals who are exceptionally intelligent.

There’s no doubt that she has made some big gaffes in recent months.  She confused serial killer John Wayne Gacy with actor John Wayne.  She said it was the founding father’s mission to abolish slavery.  She thought Lexington and Concord, where the shot that began the Revolutionary War was fired, was in New Hampshire where she was speaking.  The list goes on and on.

She is a hard worker, with Mars (representing our drive and inspiration) in practical Capricorn, but Mars is opposite Uranus in the chart which generally denotes a rebellious streak.  We can see this in her biography: after leaving high school she spent a summer working on a kibbutz, not the most orthodox thing for a nice Lutheran girl to do.

Bachmann was born into a family of Lutheran Democrats, and evidently changed party affiliations while Jimmy Carter was president.  While in college, she and her new husband Marcus converted to evangelical Christianity and supported Jimmy Carter but like other conservative Christians, became a Republican in 1980 after becoming disillusioned with Carter’s liberal social “agenda.”

Jupiter is conjunct Pluto in her chart, an aspect that often denotes extreme self-righteousness and rigid (Pluto) beliefs and dogma (Jupiter).  Both planets are retrograde, so she truly believes, at the deepest level, that she is right.  About everything.  And it is this intensity (Pluto) of belief (Jupiter) that drives Michelle Bachman to want to re-inject God, or at least her vision of him, into the nation in order to save it from imminent collapse.

Jupiter and Pluto both oppose her Aquarian Moon, an aspect that denotes a complex relationship with the mother and a childhood fraught with insecurity (both represented by the Moon).  The Moon represents our emotions and shows how our feelings are expressed, and because Aquarius is a supremely rational sign, emotions are difficult to access and feelings become more remote.  Bachmann has no water in any of the personal planets in her chart, revealing her inability to access her emotions easily and with Pluto opposite the Moon there are intense emotions flowing through her system that have no easy expression.

I became very interested in Bachmann after reading of her migraines, because it is not uncommon for Aquarian Moon people to suffer from migraines.  In Aquarius the emotions are filtered through the reason of the mind.  It appears to me that emotions, having no conduit for expression, build up to a point where the pressure in the mind becomes so intense that a migraine results.

Venus (relationships) in Bachmann’s chart is in the air sign of communicative Gemini, explaining why the idea of marriage is a favorite topic of conversation for her.  Saturn opposes her Venus, which is helpful for establishing commitments but can also result in relationships that are challenging.  It is rumored that Marcus, Bachmann’s husband of 33 years, who is himself in the business of converting gays through prayer, is gay.

You might enjoy this comprehensive biography of Michelle Bachmann at the New Yorker site.

Michelle Bachman has no shortage of positive planetary cycles until the end of November, so she is likely to get quite a bit of traction from her Iowa win.  Personally I think it’s unlikely that she will be taken seriously enough by the Republican party leaders to be nominated, but she is driven enough to go the distance, and smart enough to know how to appeal to her market.