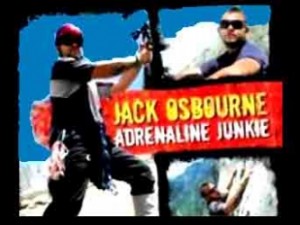 His Virgo Moon can be somewhat fearful and security-driven, and while the Leo ascendant seeks the spotlight his Virgo Moon likely worries about the future and his Scorpio Sun shrinks from all of that attention and exposure of his inner world.  I suspect that while Jack’s Leo ascendant would have been quite excited about the reality show with his family, it was likely very difficult for him and created a great deal of inner stress.

Still, when the original show The Osbournes was over Jack signed up for a new reality show called Adrenaline Junkie.   This is interesting astrologically because Jack has a weak Mars – situated in the peace and harmony-loving sign of Libra, the warrior planet is not easily expressed here.  His Mars is squared by Neptune, a quality that was evident in other charts that I examined for the article cited above.  Neptune is the planet of transcendence and spirituality, and when placed in a challenging aspect to Mars we tend to see individuals who seek to transcend their drive and desire nature (Mars) rather than express it.  Consequently that drive and aggressive force tends to build up in the body where it cannot easily find an outlet and this can result in health problems.  Please note that I am not a trained medical professional and any advice given in this column should be confirmed with your doctor.

A Grand Trine in Jack’s chart links Mars, Jupiter (abundance and good fortune) with Chiron, the planet of wounding and healing.  Jack began to turn his life around in 2004 when a complete physical makeover prepared him for the new program which pushed his physical abilities to the limit, the perfect thing for a Mars-challenged individual.  With this Grand Trine I think it is likely that the MS diagnosis will not create crippling problems for him.

He does have an opposition from Chiron to Uranus (see more details in this article) which can indicate an unbalanced and extremely sensitive nervous system. This would make him more susceptible to the kind of nerve damage found in MS.

Jack has been going through some challenging transits to his natal and progressed Mars over the past year or so involving Saturn (conjunction to progressed Mars beginning last November), Pluto (square natal Mars beginning in January) and Uranus (opposing natal Mars beginning late May).  Transiting planets hitting Mars in our chart can trigger eruptions of some kind, and since Jack is currently without a physical outlet for his adrenaline  (having become engaged in the fall of 2011 and a recent new dad) he is likely more sensitive to the planetary triggers to his nervous system.

This kind of Mars-related immune disorder drains physical energy and makes it feel impossible to get any kind of physical activity, but it is my hypothesis that this is exactly what is helpful to combat these illnesses. And http://www.overcomingmultiplesclerosis.org/Recovery-Program/Exercise/” target=”_blank” rel=”noopener”>science agrees:

In the 1970s, there was quite strong prevailing medical opinion that people with MS should avoid exercise, that it could somehow be detrimental. There is now good evidence that exercise improves fitness and function in mild MS and maintains function for people moderate to severe disability.4 There is strong evidence that exercise therapy, including aerobic exercise and resistance training, improves muscle power function, exercise tolerance functions and mobility-related activities such as walking in people with significant disability.5-11Exercise also improves mood and general well-being.7,12,13 Walking distance has been shown to be increased with regular treadmill training.14 Interestingly, some of the benefit of exercise in MS seems to be more pronounced in women.15

I’m very encouraged to see mainstream medicine continuing to exhibit more openness to the body/mind/spirit connections to disease.  Meanwhile, my best recommendation for just about everyone is to get as much sensible physical activity as is reasonably possible.  Not only is it healing for the body, the mind AND the spirit, it is the Fountain of Youth!