This article was originally posted in 2009 but has been updated to account for recent events. 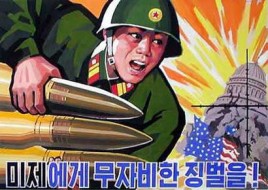 The Sun in the North Korea chart is in Virgo where it is in the final stage of a transit of Saturn.   Virgo has many positive attributes, but one of its negative qualities is a tendency towards miserliness and even deprivation and we have certainly seen this negative side with the starvation that occurs in that country. Virgo is an industrious sign that emphasizes humility and service rather than excellence and personal achievement, and this is certainly reflected in the fact that the North Korean government is run by the Korean Workers Party.

The Sun here is squared by Jupiter which can reveal a tendency towards arrogance and self-righteousness.  Jupiter is particularly powerful here in its own sign of Sagittarius and while we like to think of Jupiter in its role as “The Greater Benefic” it can denote a fanatical and dogmatic philosophy of government.  I like to say that Jupiter shows where we want to be god (Jupiter of course was King of the gods on Mt. Olympus), and with a powerful Jupiter in a challenging square to the Sun one’s self-aggrandizement can take dangerous proportions.

The Moon, showing where the heart of the people lies, is also in Sagittarius which reflects the need of the people to believe the best and retain an optimistic viewpoint.  The Moon is in a harmonious trine to Venus which in a mundane chart rules entertainment and the arts, and Sagittarius is associated with entertainment as well.  There is no doubt that the North Korean people are energized by artistic performances which are all controlled by the State.  The North Korean stadium that houses the enormously popular Mass Games holds 150,000 people and is reportedly the largest of its kind in the world.

Several days ago North Korea, reacting to South Korean military drills near the North Korean coast, began shelling a small island in South Korean territory killing two civilians and setting off a firestorm of international condemnation.  Friday’s New Moon, at 29 degrees Taurus, was within one degree of Uranus in the North Korean chart – the planet that inspires revolutionary behavior and disruption.

For more information on the planetary aspects during 2008 and 2009 that marked the escalation of tensions, please see the latter section of my original post here.

Uranus in the North Korean chart is at zero degrees Cancer, and the planets in the Cardinal Drama have been stimulating the desire for change within the country as reflected by the planetary significance of Uranus.  When Jupiter and Uranus formed a square to Uranus in the national chart the sinking of a South Korean naval vessel heightened tensions between the two nations; shortly thereafter in June, as the Cardinal Drama reached its peak, there was a reshuffle of leadership in the top positions.

When Jupiter and Uranus return to the zero degree Aries point in early spring of 2011, this point in the North Korean chart will be stimulated again and it will be very interesting to see what happens.  While it is rumored that Kim Jong Il’s son is preparing to take control of the helm, sources say that the father ordered the attack and is still very much in charge.  You may also be interested in the astrological profile of Kim Jong Il.