The astrology of North Korea

The astrology of North Korea 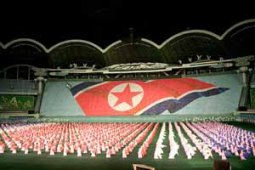 The Sun in the North Korea chart is in Virgo where it is in the final stage of a transit of Saturn.   Virgo has many positive attributes, but one of its negative qualities is a tendency towards miserliness and even deprivation and we have certainly seen this negative side with the starvation that occurs in that country. Virgo is an industrious sign that emphasizes humility and service rather than excellence and personal achievement, and this is certainly reflected in the fact that the North Korean government is run by the Korean Workers Party.

The Sun here is squared by Jupiter which can reveal a tendency towards arrogance and self-righteousness.  Jupiter is particularly powerful here in its own sign of Sagittarius and while we like to think of Jupiter in its role as “The Greater Benefic” it can denote a fanatical and dogmatic philosophy of government.  I like to say that Jupiter shows where we want to be god (Jupiter of course was King of the gods on Mt. Olympus), and with a powerful Jupiter in a challenging square to the Sun one’s self-aggrandizement can take dangerous proportions.

The Moon, showing where the heart of the people lies, is also in Sagittarius which reflects the need of the people to believe the best and retain an optimistic viewpoint.  The Moon is in a harmonious trine to Venus which in a mundane chart rules entertainment and the arts, and Sagittarius is associated with entertainment as well.  There is no doubt that the North Korean people are energized by artistic performances which are all controlled by the State.  The North Korean stadium that houses the enormously popular Mass Games holds 150,000 people and is reportedly the largest of its kind in the world.

Last year transiting Saturn began a conjunction to the Sun in the chart for North Korea, setting off the square to Jupiter in the chart as well.  North Korea desperately wants to be a  major player and gain the respect (Sun/Jupiter square) that it would like to deserve.  However, the dichotomy of the grandiose schemes of Sagittarian Jupiter in conflict with the small eye for details and the need for control of the Virgo Sun stands in its way.  Since last Fall the North Korean government has been amping up its missile tests and aggressive rhetoric, peaking in May with its nuclear missile test with progressed Mars (warfare) having just made a square to the Sun in the national chart (fighting for one’s identity).

Transiting Pluto has been squaring off against Uranus in the national chart as well, fomenting rebellion and calling for significant change.  That aspect completes this summer between August and October.

Sober astrologers will take no heart in the progressed Sun-Pluto square in the North Korean horoscope nearing exactitude. The nearly exact progressed trine of Mars and Pluto (2) is a further indication that the North now has the technology mastered in order to put a nuclear warhead onto a ballistic missile. Japan is in range of the nuclear capabilities of North Korea and with the progressed Mars in the 1950 war chart in the same degree as the progressed MC in the North Korean horoscope, one should not expect U.N. Security Council sanctions to do anything other than to prod this regime to pull the trigger on the South or to engage in naval warfare with the United States if interdiction of its vessels is attempted.