The astrology of Pete Buttigieg

The astrology of Pete Buttigieg
Embed from Getty Images

We don’t have a birth time for Mayor Pete – his book quotes him as being born at night and astro.com and Astrotheme suggest a time of 9 pm, but I’m rather particular about birth times and if we don’t know it to be true I would prefer not to use it.  He was born at the very last degree of Capricorn, and his Moon at night, per his autobiography, would be in Sagittarius, the sign of optimism and faith.  This Sagittarius Moon would bestow the confidence that he would need to continue to pursue his goals. 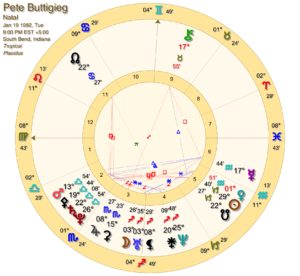 The 29th degree of the Sun is significant – rather than being on the cusp of the next sign, it actually marks the end of a process.  It is considered to be the weakest point of the cycle of a particular sign, and in fact there begins to be some bleed-through into the next sign since around age one the individual’s Sun will progress into that next sign for the following 30 years.  There is a sense with 29th degree people that they are completing a karmic assignment, for better or worse.

Buttigieg’s Sun makes a challenging square aspect to Pluto and Saturn. Saturn conjoins Pluto in Libra, which can itself be problematic and often comes with a childhood of deprivation and difficulty.  When the Sun is stressed by Saturn and Pluto there is a tremendous amount of pressure that sometimes results in an emotional or psychological crisis.  We don’t know much about Mayor Pete’s childhood, so this cannot be verified.  In any case, it does appear that this conjunction of Saturn to Pluto in a square to his Sun has impelled Buttigieg to work hard and diligently towards success.

Buttigieg has three planets in Libra, including Mars which suggests an individual whose main drive (Mars) is to get along.  For Mars in Libra people, peace is a priority.  They are supreme diplomats and tacticians.

The fact that Saturn (and Pluto, though that contact is not as strong) is in a nearly exact challenging square to the lunar nodes of Fate suggest what is sometimes called a “skipped step” in a person’s evolutionary journey which makes Saturn’s focus on hard work and achievement an important aspect of Buttigieg’s life.  In fact, Mayor Pete was elected mayor during his Saturn return (age 29), as transiting Saturn hit both Saturn and Pluto in his chart, proving the point that for some the Saturn return can be a time of great success and diligence.

His Aquarius Mercury trines both Mars and Saturn, energizing and focusing his thinking and communication.  With five planets in air signs, Mayor Pete maintains a degree of objectivity which can be a big help in serving the community through political means.

It’s difficult to predict how far Buttigieg can go.  It’s quite possible that a gay man cannot, in 2020, win the presidency no matter how qualified or smart he is.  His Pluto, at 26 Libra, is nearly exactly square to the US Pluto which will be undergoing the Pluto Return in 2020-2023 which is nearly certain to bring cataclysmic change to the US government.  The person elected President in 2020 will likely serve under that intense alignment.

Both Saturn and Pluto are challenging HIS Saturn and Pluto, which under normal circumstances would carry pretty strong potential for crisis and problems and Buttigieg did lose his father when he died in January of 2019 during these alignments.  But for people like Mayor Pete, who seem to thrive under adversity, this could serve merely to increase his determination.  It’s difficult to predict exactly how this would manifest.  Saturn and Pluto will continue to challenge his chart in early 2020 in advance of the primaries, and at the time of the primaries a stressful aspect from Jupiter to Pluto could derail his campaign from outside.  If he can’t win the primaries and secure the nomination, of course he would not be able to win the presidency.

The synastry (comparison) between Buttigieg’s chart and the chart for the US does not, in my opinion, have sufficient resonance to suggest that Buttigieg would be chosen to run the country.  It’s possible that he could run as VP, and it’s indisputable that he will have a long and successful career.  But I do not see that there is real potential here for him to win the presidency.