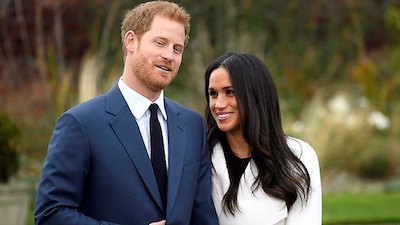 photo from Flickr. Prince Harry and Meghan Markle are set to marry on May 19, 2018 and the royal watchers are abuzz with gossip.  Will it last?  Is she a gold digger?  What about the racists?  Meanwhile Germaine Greer has predicted that Meghan will “bolt” from the marriage, and an assortment of psychics are predicting that the wedding will be postponed, that it won’t happen, that that it won’t last, that they will have three children, etc. etc.

Astrology can give us a window into a relationship and provide hints as to compatibility and durability.  What it cannot do, however, is predict whether two people will stay together.  I have seen couples with perfectly harmonious charts split up because there’s not enough tension to hold the relationship together.  And I have seen couples with very little compatibility who have long-term successful marriages.

All that aside, let’s take a look at Meghan and Harry to see how they are connected and where their difficulties might arise.  You can catch up on Harry’s chart analysis here, and Meghan’s here.

Meghan and Harry’s astrology as individuals

Meghan and Harry are an example of two very different people uniting in a common purpose.  With his Sun Sign in Virgo in a harmonious trine to his Taurus Moon and Capricorn rising (all Earth signs), Harry is at his core an extremely grounded and practical individual.  However, his freewheeling Mars (drive and desires) conjunct Uranus (radical departure from the norm) in Sagittarius, the sign of freedom and adventure adds a radical side to his personality which defies the kind of structure which the earthy element creates.  In the earlier article about Harry quoted above I wrote:

The conflict between this iconoclastic rabble-rouser and the earthy pragmatism is a challenging one and in a conflict like this we often project one side into outer life.  Because Harry was brought up in the tightly controlled environment of British royalty, this need to be responsible to the British people appears to be a strong professional motivator and in fact, the planet of responsibility, Saturn, sits right on the Midheaven (the point of career and public life).  But this Uranian/Sagittarian side inspires him to create change in the monarchy; to modernize it for the 21st century.

In marrying Meghan Markle, a divorced biracial American, he is certainly modernizing the monarchy and finding a unique way to balance his deep sense of responsibility to “The Firm” as he calls the royal family with his rebellious tendencies.

Meghan’s chart shows a Leo Sun which seeks a more personal expression than Harry’s Virgo Sun. Her Libra Moon signifies a craving for partnership and a need for personal harmony, but her Moon is impinged by both Saturn (isolation, loneliness, achievement) and Jupiter (expansion, confidence and good fortune).  This obviously creates a push-pull of enthusiasm from Jupiter and sadness and insecurity from Saturn that can be difficult to balance.  This could manifest in a basically hopeful attitude (Jupiter) combined with a deep insecurity. And in Libra, she needs for everyone else to be happy so that her life can remain in balance.  This is echoed by the Cancer ascendant which is focused on nurturing and taking care of things which we see in her devotion to rescue animals and the charity work she has been doing with children for years, and her Mars (drive and desire) is also in Cancer.

Connections between Meghan and Harry 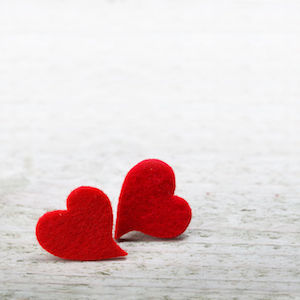 The descendant of the chart is the sign on the cusp of the seventh house of marriage and partnership.  This sign reveals something about the kind of energy we draw from others (though this is just one factor and not to be relied upon 100%).  Harry has Cancer on the cusp of the 7th house, and Meghan has Cancer rising, so she appears (rising sign) to fit his partnership profile, and the same goes for Meghan who has Capricorn on the cusp of the 7th house matching Harry’s ascendant.  This pairing draws the two together, but there is some danger that it is all about appearances rather than substance.  Each appears as the other’s ideal which is an excellent starting point and while I don’t mean this to seem as though there is any subterfuge in this pairing, we sometimes see what we want to see especially in the beginning of a relationship.

I would ideally like to see some contacts between the personal planets of the charts of a couple about to be married, especially the Moon and Venus.  Harry’s Moon is in Taurus and Meghan’s Moon is in Libra – not compatible signs necessarily but both are Venus ruled and have similar motivations for harmony and comfort. Meghan’s Sun harmonizes with Harry’s Venus (wide sextile) and with Harry’s Mars (tight trine), so she inspires and energizes him which is a positive thing.  Harry’s Sun connects loosely with Meghan’s Venus (wide conjunction) but the connection is not super strong.

There are some difficulties, which we would find in any relationship: Uranus in Meghan’s chart makes a challenging aspect (opposition) to Harry’s Moon which is exciting and can make a relationship always seem new, but it could also create a situation where Harry never feels really secure in the relationship.  Harry’s Saturn makes a challenging aspect to Meghan’s Sun which suggests that he may feel she literally outshines him and that he needs to contain her light (a distressing echo of his parents’ relationship in which Charles felt threatened by Diana’s popularity).

There are some incompatibilities in the chart which will create difficulties but are not insurmountable.  Harry’s Libra Venus harmonizes with Meghan’s Libra planets, but there is dissonance with Meghan’s Venus in Virgo – they express their relationship needs differently.  But this is counterbalanced by the connection between Meghan’s Venus and Harry’s Sun.  Communication (Mercury) is critical in relationships and Meghan’s Leo Mercury needs a great deal of personal validation where Harry’s Virgo Mercury is all business.  Communication will not come easily to them but will take some effort and understanding.  And her Mars in Cancer shows that her actions are driven by emotion, very different than Harry’s Sagittarian Mars which gives him a need to continually spread his wings.  She will likely want him to spend more time at home, and he will be off adventuring.

Who they are as a couple – the composite chart 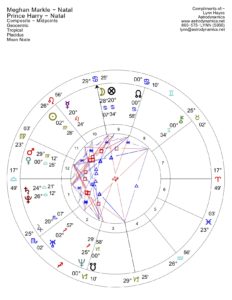 There are an infinite number of calculations that we can make to assess relationships between individuals.  One of these is the composite chart, which merges the two charts into one to come up with a chart revealing the quality of the relationship itself.

Libra is rising in the composite chart of Meghan and Harry’s relationship.  Libra is the sign of love and beauty, so this is signifies that their connection is motivated by their desire to be in relationship and to be true partners.  The nurturing Cancer Moon is ideal for a happy home life, and the Moon is nearly exactly conjunct the Midheaven – the point of public life and vocation.  Their joy of their relationship will manifest in their royal duties which include interacting with the outer world, and this will help them to find the sense of purpose which they both crave. The Sun, in Virgo, motivates them to serve and to create order, and in the 11th house of friendship we can see that above all else they will be friends, which is an important part of any marriage. A challenging aspect from the Sun to radical Uranus suggests that there relationship itself will be unconventional and break all the rules – it also suggests the possibility of long periods apart and perhaps even living apart at times.  The two most powerful planets – Saturn and Pluto – meet in the first house of the identity of the relationship, showing that this is not a relationship of perfect harmony and bliss that lasts a lifetime.  They will be continually challenged to change and transform and it will not be easy.

All relationships require adjustments and understanding of differences.  The most compelling relationships, the soulmate relationships that inspire us to grow and evolve, are with people who may have characteristics that we lack or which are needed for our personality to be able to find balance and harmony.  An astrologer cannot predict whether a relationship will last – we can only identify the strengths and weaknesses and potential issues that may arise.