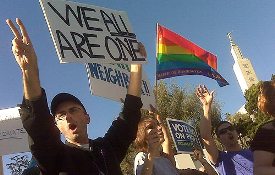 Yesterday’s ruling by a federal district judge overturning Proposition 8 occurred in the midst of a big planetary lineup involving Mars, Saturn, Jupiter, Saturn and Pluto.  Proposition 8 (the California Marriage Protection Act) restricted the state’s definition of marriage to opposite-sex couples and invalidated all same-sex marriages that had occurred in the state prior to that time.

The election of November of 2008 that passed Proposition 8 coincided with  the first opposition between Saturn (conventional thinking and morality) and Uranus (liberation and the breaking free from the status quo).  This was the same election that voted in Barack Obama’s hope for change.  The pull between the old ways and something new has been exceptionally strong over the past two years as a result of the Saturn/Uranus opposition.

During the nearly two years since that time, as Saturn and Uranus faced off a total of five times, “change” has been in the air in virtually every aspect of life.  Liberals and conservatives alike have become more radical, and an increased divisiveness around the world has been the result.

Proposition 8 was overturned yesterday with Saturn and Uranus having made the final exact opposition last week (the two planets are still just one degree of arc from the exact aspect), and Mars acted as a trigger to instigate the change.

Yesterday’s ruling will not be the end of the question: both sides are committed to press the case to the Supreme Court.  Saturn is now in Libra, the sign of marriage, and the boundaries of what constitutes marriage will continue to be tested and redefined.

But we are in the middle of another cycle, the conjunction of Jupiter (expansion) and Uranus (radical change) which is likely to continue the pressure for increased freedom and liberation in all aspects of global society.  This pressure will continue into 2012 and 2013 when Uranus begins to square Pluto (repression and transformation) when things will really start to get exciting.

Change under the Uranus/Pluto influence is virtually assured.  This, after all, is the influence that brought us the multiple revolutions of the 1960s.  The past does not always die easily though, and as we move into the Age of Aquarius resistance to change will continue to be a constant force as boundaries of social and political structures are shattered and altered forever.