The astrology of Roe v. Wade: The Pluto connection
Embed from Getty Images 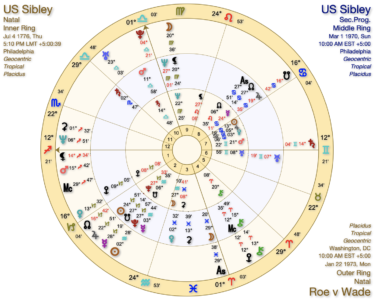 The transits were even more interesting. (Note: progressed planets tend to reveal inner shifts and changes where transits of planets moving through the sky to natal or national charts tend to coincide with events.)

On June 24, 2022 at around 10 am it was announced that the US Supreme Court has struck down the Roe v. Wade decision. This was certainly not a surprise since a draft decision had leaked a few months ago. This is an extremely unpopular opinion since even most Republicans did not want Roe v. Wade to be overturned according to the Pew research group.

We are in the throes of the US Pluto Return – the time when Pluto returns to the same degree as it was in the national astrological chart. Everything you see in the news, from alarm over the end of US democracy, to election lies, to political rage and violence in the street, can be connected to this significant planetary alignment.

I will be covering more details about the current state of the US chart in my July 4th report. The overturning of Roe v. Wade is just one of many incidents that are marking this turning point in American society and law.