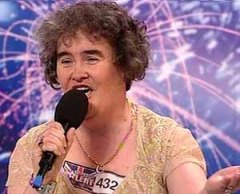 The You Tube video of Susan Boyle’s audition for “Britain’s Got Talent” has become a sensation all over the world.  When an average person shoots from obscurity to international acclaim literally overnight, there is usually a very interesting astrological background.

Date of birth saga.  A birth date (June 15, 1961, time unknown, Blackburn, West Lothian, Scotland) was posted in a profile in the Sunday Times in the UK, but this was later disputed by the UK astrology website Cainer.com who obtained the date of April 1, 1961 from the publicist at Britain’s Got Talent.  This date was confirmed by telephone by David Nicholson at Cainer who called the Registrar of birth records in Bathgate.  Marjorie Orr had a birth time of 9:50 am on her site, which she told me came from Caroline Gerard, a genealogist in Scotland, and this birth time was confirmed by Kathryn Cassidy (who also works for Cainer) this morning.

This has set up an interesting conundrum for astrologers because we really like the other chart – it fits perfectly with our idea of who Susan Boyle is.  But this is the pitfall of doing an astrological profile of celebrities about whom virtually nothing is known – they become nothing more than a hook for our own projections.  I find that the most surprising readings that I ever do are for acquaintances whom I know slightly.  I have an idea of who they are, and then when I do the chart it doesn’t fit with my concept of that person, but it fits exactly with who they really are..

So I have posted the new chart here, and have thrown away my fantasy of who I think Susan Boyle is.

Susan Boyle has the Sun in Aries, so the quest of her lifetime is to develop the courage and honesty to follow her own instincts and pursue her own adventures.  However, that Sun is opposite the Moon in her chart, which is in Libra.  That Libra Moon longs for the safety and security (Moon) of peaceful and harmonious relationships, and in opposition to the Aries Sun shows an inner conflict between the need to pursue her own desires (Aries) and the need to accommodate others (Libra).

With a 9:50 am time of birth we have 28 degrees of Gemini on the ascendant, which is bleeding into Cancer, and Mars in her chart is in Cancer so there is a strong Cancerian component.  The Gemini ascendant shows an ability to blend in with any environment, and to take on any role that suits at the moment.

This Cancer Mars forms what we call a “T-square” with the Sun and Moon, in which Mars forms a challenging square to both the Sun and to the Moon, which are already in opposition and in a state of tension.  The battle for Susan between the need to do what she wants and the need to care for others is one of the primary issues in this chart and she has likely wrestled with this for quite a long time.

Venus in Susan’s chart is retrograde, meaning it appeared to move backwards at the time she was born, which often creates shyness in an individual, and a reluctance to engage in relationships.  In Aries this becomes an interesting combination of the Aries aggression with the retrograde shyness.  Much has been made of Susan’s claim that she was never kissed, which she later said was “just joking around.”  Still, she was never married, and the challenging square of Saturn to her natal Venus usually depicts an individual who is deeply insecure about her attractiveness and ability to attract a mate.  I have seen plenty of people with Saturn square to Venus who are happily married, but the insecurity tends to run deep.

It appears that Susan never left home, and cared for her eight brothers and sisters, then her father and finally her mother who died in 2007 at the age of 91.  I wasn’t able to find a date of death for Susan’s mother, but that fall, transiting Saturn passed over Pluto in Susan’s chart.  When the Lord of Karma (Saturn) meets the Lord of Death (Pluto), there can be some dark times and surely this was true for Susan as she lived alone in her family home after 39 years of caring for others.  But with Pluto there is always a rebirth connected to death, and an opportunity to begin a new life and this is certainly true for Susan!

The challenges in Susan’s chart are ameliorated by the Grand Trine in water signs between Neptune, Mars and Mercury.  Grand Trines are harmonious aspects that promote ease and bring good fortune, but also can bring a tendency towards complacency and difficulty in moving forward in one’s life.  The combination of a Grand Trine with the challenging T-square offers a more dynamic approach to one’s life, but the desire for comfort with the Grand Trine is difficult to overcome.

Had we taken a look at Susan’s chart before this event we could have predicted that something significant was about to happen for her.  Her progressed Midheaven is exactly trine her progressed Ascendant, by itself a harbinger of an event of significance, and both are in harmonious relationship to Jupiter, the Great Benefic.  Transiting Pluto has been challenging her progressed Midheaven, which could have the effect of forcing a major transformation that is enhanced by all the harmonious energy around these aspects.

At the time of the audition transiting Jupiter had just conjoined natal Jupiter, something we call the “Jupiter Return,”  time of great opportunity. Jupiter was also aspecting many other points in her chart, and clearly this was a time of great expansion and freedom for her.  And then on April 17 transiting Jupiter opposed Uranus in her chart, signaling a surprising (Uranus) opportunity (Jupiter).  Surprising indeed!  That was the day that Susan Boyle went viral on the internet, changing her life forever.