The Astrology of the Australian Bushfires

The Astrology of the Australian Bushfires 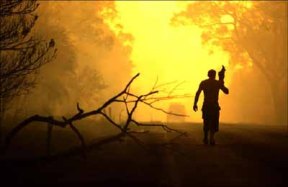 The timing of the horrific fires in Australia coincidental to a penumbral eclipse of the Moon that peaks today appears to be significant.  As I have been writing, we have experienced a shortage of the Fire element and a preponderance of Aquarius which is not only airy and dry, but also electrical in nature.

The eclipse is in Leo, a fiery sign that tends to be somewhat larger than life.  I was unable to find exactly when these fires began, but it appears to have been sometime on Saturday.  Uranus, the ruler of Aquarius and the planet ruling electromagnetic energy and sudden change, was exactly opposite Saturn as it crossed the Ascendant at 9:23 am in Melbourne, which is near Kinglake, one of the sites with the worst fires.  The firestorms spread rapidly once they began, burning houses to cinders within minutes and overwhelming residents in their cars as they attempted to flee the area.

The Moon was still in Cancer when the fires started, but the energy of a Full Moon typically begins about three days before the actual event and in the case of an eclipse that is even more true, so the eclipse effect was beginning to accelerate at this time.

It appears that the fires were the result of a combination of factors: possibly arsonists (rebels (Uranus) against the system (Saturn)), combined with high temperatures, dry conditions and winds (Aquarius and the Leo lunar eclipse).

Eclipses are associated with revelations of some kind, and there are indications that the higher temperatures that facilitated the fires may be caused by global warming. Although eclipses have been feared into antiquity, they are not usually associated with this kind of devastating event.  However, the symbology is rather vivid here.