The astrology of the Cumbria shooting and a word about twins

The astrology of the Cumbria shooting and a word about twins 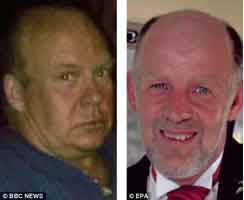 This mass murder occurred while we were still in England and it was very much in the news. This kind of murder spree almost never occurs there and was quite shocking. The shooter, Derrick Bird, first shot his twin brother and the family lawyer, and then went on to shoot a coworker and a string of anonymous strangers before killing himself. As so often happens, Bird was described as “a quiet and unassuming man,” “friendly and quiet.” So what made him snap in such a horrific manner?

Bird (October 8, 1957) had four planets in Libra: the Sun, Jupiter, Mars and Mercury. We don’t know his time of birth so we cannot tell his ascendant which would provide more clues, but with three of his personal planets in Libra he was very much motivated towards peace and harmony between people. The conjunction of the Sun to Jupiter typically reveals a jovial and optimistic outlook, but that conjunction to Mars is troublesome as it brings a stronger drive and need for assertion of the aggressive instinct. Mars in Libra finds it difficult to express itself aggressively and is said to be in its detriment there. When our Mars cannnot find release, it becomes blocked and a deep rage can result.

This would have been exacerbated for Bird because he was born with the Moon in Aries in opposition to the Libra stellium (grouping of planets). The Aries Moon craves to be first – to be a leader, to be respected and honored. Aries also needs to be able to demand and receive satisfaction; simply said, they need to have their own way. The strong Libra component makes that difficult, because for Libra it’s more important that others be happy so that everyone’s equilibrium is preserved.

Full Moon personalities tend to be larger than life; if the Sun and Moon are well integrated there can be an ability to bring the conscious mind and subconscious instincts together for emotional wholeness and power. But if the Sun and Moon are split — as in this case, between the lunar need for a primal satisfaction of needs and the need of the Libran planets to please others — dissociation and a loss of a grip on reality can result.

In Bird’s case that primal Aries Moon opposed not only the Sun but also Jupiter (creating a sense of self-importance), Mars (inflaming the emotions to anger and reactivity) and Mercury (emotional reactivity and lack of objectivity). Bird also had Venus in Scorpio which can carry a deep grudge in relationships, and this Venus is unaspected which would have made it difficult for him to feel connected to others despite that Scorpionic deep longing to do so.

To cap it off, Bird was a twin and in the case of twins we usually see one twin playing out one aspect of the chart and the other plays out a different aspect. So with this chart we would see one twin as the peacemaker and the other twin carrying the rage of an unexpressed Mars/Aries. Evidently Bird had recently discovered that his twin brother had never repaid a 25,000 GBP loan from their father’s estate.

An article in the Daily Mail reveals the difference between the twins and Derrick Bird’s “gnawing jealousy.”  According to this article the twins were only five minutes apart, which suggests that their ascendant is probably the same sign so that cannot explain away the difference in the lives of the two twins.  From all the evidence available to us, it appears that while David Bird played out the sunny Libra with the Sun/Jupiter conjunction, Derrick took the role of the angry and sulky Aries Moon opposed by Mars with unaspected Scorpio Moon – unable to confront his problems directly and who instead took the easy road to expressing his erupting anger and lack of empowerment – through bloody violence.