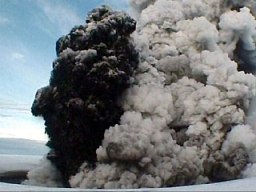 On April 14th, at the time of the New Moon in the early degrees of Aries (fire and initiation), the volcano resumed its eruptions, causing flooding and the release of a large cloud of volcanic ash that closed the airspace in Iceland and Norway.  By April 15th most of the United Kingdom was also closed to air travel, and the large cloud of volcanic ash quickly spread to other parts of Europe.

A look at the geodetics of the situation provides a clue to the location of this event.  Geodetic astrology is the fascinating application of astrology to the geodetic map, beginning with the zero degree Aries point at the Greenwich meridian.  Using this system, the Midheaven line of Reyjkavic in Iceland is located at about 9 degrees of Aries, in a close aspect to both the Saturn/Pluto square and the Aries New Moon.

And unrelated to the geodetics of the situation but corresponding to the Aries New Moon, a fireball blazed in the sky throughout the midwest states of the US on Wednesday night as the fiery Aries New Moon squared off against Pluto.

Update:  Jamie Funk kindly linked to this article and added an interesting fixed star connection:  “The fixed star Scheat is 29pis31. The day of the last New Moon, Saturn was exactly opposite at 29vir31. This is important because Scheat has long been associated with catastrophic events. The influence of Scheat is gaining strength as Uranus is applying within one degree of this star, soon to be followed in conjunction with Jupiter. Aviation has been effected before when planets conjunct Scheat, as discussed in Jupiter Conjunct Uranus – Scheat 2010.”

Dharmaruci adds: Iceland has natal Saturn (its physical structure) at 29.39 Gemini. Uranus will exactly square this Saturn in a few weeks, and Jupiter a few weeks after that, so it would not surprise me if the current volcanic activity coninues, or even intensifies, over the next 6 weeks, or even through to next March, when Jupiter and Uranus make their final squares to the Icelandic Saturn.