The astrology of the Oslo bombing

The astrology of the Oslo bombing 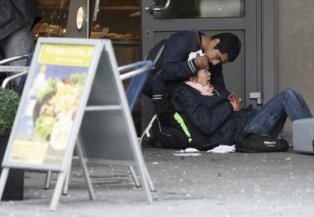 On Friday July 22nd at 3:26 pm local time, a bomb ripped through government building in Oslo.  This attack was followed by the murder of 87 people at a Labor Party youth camp not far away.

The chart for Norway originates in its independence from Sweden on June 7, 1905 at 11:00 am local time in Oslo.  The astrology for the day of the bombings is rather startling.  Mars was sitting on the South Node last week and astrologer Martin Davis wrote on his Facebook page:

Astrologers: Note that Mars [anger] is coming to conjoin the South Node [past issues] now. This is a difficult combination – often in disaster charts. This conjunction in airy Gemini correlates with angry budget discussions, angry American football contract discussions and the uncovering of newspaper [Gemini] wrong doings. It’s on the natal Mars of any July 4th US chart. Buckle up when driving.

The young man who committed this horrific crime, Anders Breivik, was born February 13, 1979 (time unknown).  His Sun is conjunct Mars and Mercury in the idealistic sign of Aquarius.  Aquarius is often concerned with ideas of Utopia.  Uranus is square to those Aquarius planets, giving him a big does of Aquarian/Uranian Utopia and the need for revolutionary activity.  His Virgo Moon conjoins Saturn suggesting that he is accustomed to working alone.

Supporting this theme of the “Loner” is the singleton Venus in the pragmatic sign of Capricorn.  I suspect we will find that he has been an individualist and someone who does not easily connect with others.  Perhaps a desperate loneliness (Moon/Saturn) drove him to seek a way to live outside the norm of Norwegian society.  A friend reported to a Norwegian newspaper that Breivik turned to right-wing extremism in his 20s, perhaps during his Saturn Return when this isolation would have been emphasized.  All reports suggest that he was horrified by the multiculturalism that is spreading over Norway and the rest of Europe.

I have written several times of my feeling that while the Uranus/Pluto conjunction of the 1960s occurred on the left, the Uranus/Pluto square of the next few years will occur on the right end of the political spectrum.  It appears that I was, sadly, correct.