The astrology of the Penn State scandal

The astrology of the Penn State scandal 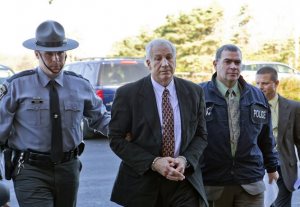 On November 4, 2011 a grand jury indicted Jerry Sandusky, former assistant football coach at Penn State University, on 40 counts of sexual abuse against young boys.  Evidently these assaults or advances had been going on since 1994 despite the knowledge of other officials with the football team.

What is even more shocking is that Sandusky apparently used a charity that he founded (The Second Mile) to find the young boys (aged 11-14) for his misadventures which he is now calling “horseplay.”  Sandusky is married and he and his wife adopted six children and fostered many others before founding the charity. I am not a qualified psychologist, but the fact that Sandusky was able to continue this double life for nearly 20 years without detection would seem to suggest some sort of psychological pathology.  Let’s see what his chart says:

Jerry Sandusky (born January 26, 1944, time unknown, Washington Pennsylvania) is a double Aquarius: both the Sun and Moon are in that sign of rational thinking and reason.  We don’t know his birth time so we can’t tell his ascendant which would tell us more about his personality, but the Sun in Sandusky’s chart is opposed by Pluto (obsession, compulsion and experiences that transform us).  In their highest form the stress and challenges of Pluto/Sun aspects empower us and strengthen our will.  In individuals who are less self-reflective, this aspect can suggest an individual with deep-seated power issues and compulsions.

The kind of intense drama that is necessitated by Pluto/Sun aspects can be very difficult for Aquarian types who tend to dislike being dragged into the underworld of emotional chaos, and sometimes there is a split in the personality as a result.  This split can manifest as someone who attracts relationships with people who are Plutonic in nature, or it can manifest as someone who themselves has split the dark Plutonian side from the airy Aquarian side.

It is not uncommon for Pluto/Sun people to have experienced abuse of various types, and often this is sexual abuse.  Researchers have found that most sexual predators were themselves abused, and then perpetuate the abuse on others.  Sandusky’s Pluto/Sun opposition falls within a degree of the nodes of the Moon, the signposts that point from our past to our future, with the Sun conjunct the South Node (the past) and Pluto conjunct the North Node (the future).  There is a tremendous force of nature with Pluto conjunct the North Node, as the intensely transformative energy of Pluto pulls us relentlessly forward into our future.  This is a man who could accomplish great things in his life, and in fact he had a reputation of doing just that.  But he was undone by the compulsions that remained locked in the subconscious with no accepetable outlet.

Sandusky’s chart shows five retrograde planets, or six if we include Chiron.  That is an exceptional number of retrogrades (only 4% of the population have five retrograde planets in their chart), and suggests someone whose attention is turned so inward that the outer world becomes simply a reflection of their inner experience.  When we combine this with the fact that Sandusky’s chart lacks the water element which would induce compassion and empathy, it is easier to understand how he is coming across in interviews over the eruption of the scandal.

Mars represents our drives, and the sexual drive falls under that category along with other drives and instincts.  Sandusky’s Mars is in Gemini, which is a dual sign that is sometimes associated with sexual experimentation because Gemini has a hunger for a variety of experiences.  The fact that Mars conjoins Uranus, the planet of radical behavior and also the root of the word Uranian which is sometimes defined as the “third sex,” adds another layer to the idea that Sandusky’s sexuality is complex and requires a great deal of stimulation and new experiences.

It also doesn’t help him that Saturn (retrograde, signifying a deep self-criticism) opposes his Venus (relationships), bestowing an insecurity which often needs constant reassurance of one’s loveability and value.  Yet we also see a nearly exact Grand Trine in air, with Mars/Uranus in a trine to Neptune and the Sun/Pluto/Node system turning the Grand Trine into a Kite formation.  Grand Trines are supremely harmonious and they create ease in life, and an airy Grand Trine may suggest an individual who relies on reasoning and rationalization to avoid responsibility (earth) and feelings (water).  This is especially true for someone like Sandusky who is a double Aquarian with the powerful rationality of that sign, and who lacks the easy flow of emotion that the element of water would provide.

What makes the Penn State scandal really shocking is the complicity of the judges and police in the cover-up.  I won’t detail these events but you can read the whole sordid story here.