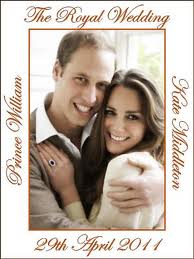 I confess I’m not that interested in the Royal Wedding that occurs today. I wasn’t that interested in Charles and Diana’s wedding either, even though that wedding had much more of the pomp and circumstance that we associate with royalty than the more modern wedding of William and Kate.

But then I read my friend Kathryn’s analysis and the whole situation became much more interesting.  Some of the interesting facts about the royal wedding according to Kathryn:

Kathryn’s post predicts that because of the Mars/Jupiter conjunction you will see “lots of people wearing red or shades of it” (red is the color of Mars).  Sure enough, William will wear his red army uniform to the wedding.

With Jupiter sitting right on the Midheaven of his chart, Prince William was born to the throne, but Neptune on his ascendant makes it more difficult for him to know who he really is.  (Chart of Prince Williams here.)This makes him more malleable and easy to manipulate, which in some ways may be a desirable attribute for a royal character who is really a figurehead for the country.  He’s extremely sensitive, with the Sun conjunct Moon in emotional Cancer, and was very connected to his mother, the Princess Diana.

The exact conjunction of Venus to Chiron in his chart suggests that relationships are painful for him, and it’s well known that Kate Middleton was not his first choice of a bride.  His heart was broken several times before he came to this decision, and the fact that the decision to marry came during his Saturn Return is, in my mind, problematic.

The Saturn Return occurs around age 28-30 when Saturn returns to its place in the birthchart.  These can be challenging times when we are forced to make choices to grow up rather than continue to pursue childish things.  There is a tendency for Saturn Return marriages to fail because so often the decision is made solely for the reason of taking that step into adulthood, rather than for the emotional connection that sustains a marriage.

Prince Williams Mars conjoins his Saturn and is being affected by his Saturn return as well.  Mars represents our drive and our desires, and when Saturn is present there can be some inhibition of our ability to seek our own path.  The fact that both Mars and Saturn are in Libra indicates a need to please others and to put one’s own needs aside for the sake of harmony.

Kate Middleton (see Astrotheme chart here with an unverified birth time) has the Sun in Capricorn which is perfect for taking on the responsibilities of the royal family, but it lies opposite her sensitive Cancer Moon.  This is the Full Moon aspect that suggests difficulty balancing one’s emotions.   Both ends of this opposition are squared by Saturn, and so Kate is undergoing a long-term transit of Saturn which encompasses her Sun, Moon and also her natal Saturn.  There is a great deal of glamour in a royal wedding, but also a great deal of responsibilities to come.

The new planet Eris sits right on the ascendant of this chart, and we don’t know enough about how Eris works to be able to make predictions based on this.  But because Eris is the planet of discord and change, it appears likely that Kate will be shaking up the establishment in some way.

With both having Moon in Cancer, Kate and William share a deep emotional connection that will hopefully be able to overcome the fact that there are not many points of contact between their charts.  Those points of contact create emotional connections between two people that we don’t see here, and the composite chart (the chart of the couple) shows Aquarius is rising and Uranus, ruler of Aquarius, sits right on the Midheaven of the composite chart.  Uranus and Aquarius are about social change and the good of the collective, but rather impersonal.

With a Cancer Moon in the fifth house of the composite chart, children are likely, but an exact square between the Sun and Moon suggests a lack of emotional connection that will eventually drive the two apart.  Mars also squares the Moon exactly, suggesting anger and resentment, and opposes the Sun which would encourage long periods of separation and conflict.

All in all this is not the astrology of an ideal marriage, but royal marriages are rarely for the purpose of emotional harmony and personal growth.  It will be very interesting to see how this plays out.