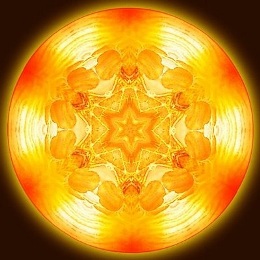 Geeky astrology lesson: the Sun only enters the cardinal signs at these periods in what we call the “tropical” zodiac.  Due to the precession of the equinoxes, the Sun is no longer aligned to the tropical zodiac.  The “sidereal” zodiac corresponds to the true location of the current position of the Sun as it travels through the twelve signs.  For example, today in the sidereal system the Sun is actually at 6 degrees Gemini and not zero degrees Cancer.  The sidereal system is used by most Vedic or Jyotish astrologers, but I have not found it to be accurate for me in my work with clients.

The chart for the Solstices and Equinoxes, which mark the turning of the seasons, are often used to predict weather and other events for the coming three solar months, so it’s useful to take a look at the chart for the Summer Solstice to see what secrets might be revealed.

The Sun at zero degrees Cancer in the Solstice chart is in an exact square to the conjunction of Jupiter and Uranus in the sign of Aries (see previous articles in this series), so this Jupiter/Uranus influence of sudden change, explosive energy, explosions, lightning, and brilliant new awakenings are likely to be highlighted throughout the season.

The opposition from Saturn to Uranus is tightening and these two planets will face off for the fifth and final time in August before the season’s turning has completed, resulting in more dissension and conflict between the old way (Saturn) and the new (Uranus).   The presence of Pluto in the Solstice chart in opposition to the Sun suggests an intensification of all experiences (including severe weather in many parts of the world) and a likely eruption of power struggles, especially since Pluto is also locked in a challenging square to Jupiter and Uranus.  Jupiter and Uranus both represent freedom and liberation, although they come to these goals from different perspectives.  The square from Pluto suggests that the stirrings of revolutionary behavior from Jupiter and Uranus will be met with a show of powerful force (Pluto).

We also have some very positive harmonious aspects here – a trine from Neptune in Aquarius to the Moon in Libra aids in the assimilation of conflict and an ability to find the truth that underlies all illusion, and Chiron at zero degrees Pisces trines the Solstice Sun at zero degrees Cancer.  Healing and wisdom (Chiron) is always available throughout any conflict that arises in this summer of intense planetary energies.

I’ll be talking more about this in tonight’s radio show on Blog Talk Radio, but here is a look at the energies in the Solstice chart for a few places around the world:

In Washington DC, seat of the United States government, the Solstice Sun falls in the twelfth house of the subconscious.  The twelfth house shows where we can be the source of our own undoing, so this placement suggests that the next few months will be a real test for the US government to wake up from any illusions under which it is currently operating.   Cancer is rising in the Solstice chart for DC, The Jupiter/Uranus conjunction sits high in the chart conjunct the Midheaven, indicating a great deal of energy for change and trying new things, although the pesky square from Pluto is likely to put the kibosh on new ideas.

In Baghdad, the Solstice Sun sits right on the Midheaven of the chart demanding to be seen.  The conflict in Iraq has been relegated to the background recently, but with this placement in the Solstice chart I suspect that Iraq will soon take center stage again.  Pluto in the chart conjoins the Nadir (cusp of the fourth house of home and ancestors) and the rifts in the fragile governmental alliance between rivalrous tribes are likely to deepen.

The Solstice chart in Kabul Afghanistan lacks the powerful alignments of the DC and Baghdad charts, suggesting that the energy in this part of the world will be somewhat subdued over the next few months.  However, Neptune sits right on the Nadir of the chart which suggests to me that the corruption and illusion of the alliances within that country and between Afghanistan and other nations will continue to grow beneath the surface and erode any efforts for peace from within.

In London, where a coalition government has just been seated, restrictive Saturn sits in the first house very near the ascendant in thrifty Virgo.  With this placement, the cost-cutting that has already begun in that nation will likely absorb much of the country’s attention over the summer.  The Jupiter/Uranus conjunction sits in the seventh house of partnership, boding well for the ability coalition government to adapt and compromise.  The Solstice Sun sits in the tenth house of career (or governmental image in a mundane chart of a nation), which is a fortunate placement for the UK this summer.

In Sydney, Neptune sits right on the ascendant of the Solstice chart.  This speaks to me of potential floods and other water events, but it could also signify confusion or delusion in some area of national affairs.

In New Orleans, the Sun/Pluto opposition falls along the ascendant/descendant axis which suggests continued stress and a growing conflict over who is in charge (Pluto) in that region.  With Saturn’s challenges falling in the fourth house of home these problems will not soon be solved, but Jupiter and Uranus sit in the tenth house of public life which suggests to me an influx of innovation and new ideas to help bring a fresh new energy into the problems of the Gulf.

The Solstice chart for Pyongyang in North Korea shows Pluto (power)  right on the ascendant of the chart.  North Korea has been flexing its muscles again, and this will continue throughout the summer.  Saturn sits exactly on the Midheaven, so a great test of the government is possible, or perhaps even a change in leader.

In Tehran, the Solstice chart has Scorpio on the ascendant, signifying a continuation of that nation’s appearance of power and secrecy, and the Solstice Sun is in the eighth house of mystery.  This sense of building power where no one can find out what’s happening is strong in the chart, but Venus sits on the Midheaven of the chart, suggesting that Iran’s focus in its public dealings will be on working out agreements and compromise.

Finally, the Solstice chart for Gaza includes a ninth house Solstice Sun, so perhaps Israel and Palestinians will begin to embrace new ideas and a new acceptance of each other.  This is hard to imagine, but this is the story told in the chart especially since Libra, the sign of diplomacy, is rising.  Pluto, opposing the Sun at the Solstice, falls in the third house of the chart which suggests that a powerful transformation can take place – either towards peace, or if those peace efforts don’t work then violent (Pluto) rhetoric (third house) could result.

The Solstice chart is only the beginning of the planetary tale for the summer.  The Cardinal Drama, as I’m calling it, will continue to intensify throughout the summer, creating change and movement wherever a shift is needed.