The astrology of Tulsi Gabbard

The astrology of Tulsi Gabbard
Embed from Getty Images

This is the latest in a series of profiles of Democratic presidential candidates.  For the others, see the list at the bottom of this article. In this series I am making every attempt to be objective, but sometimes my bias may seep through.

Tulsi Gabbard is a curious candidate and hard to pin down.  She is economically progressive, supporting Medicare for All, and socially progressive as a fairly recent convert to LGBTQ rights.  She is vegan and a practicing Hindu. She has practiced and taught martial arts and served in the armed services.  She is anti-war, except when it comes to terrorism in which case she is an avowed hawk, blaming Islam for the spread of terrorism around the world which is more of a right-wing position. This has made her a right-wing media darling, praised by Breitbart and Steve Bannon as well as David Duke and Richard Spencer, noted white nationalist leaders. In some ways this is not surprising given her background – there appears to be a natural enmity between Hindus and Muslims which wasn’t helped by the partition of Pakistan. But it does put her to the right of many Democrats in opposition to her more liberal stances on other policies. 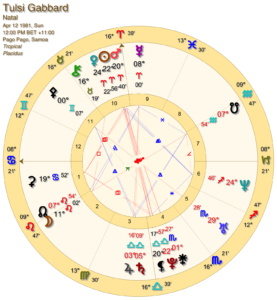 It will not surprise astrologers to learn that Ms. Gabbard (born April 12, 1981, time unknown, in American Samoa) was born under the sign of Aries, a sign ruled by Mars and dedicated towards an aggressive assertion of the Self.  Aries individuals tend to be courageous and idealistic, but usually not afraid to back down in a fight.  On top of this, her Sun conjoins Mars, the planetary ruler of Aries, which is also in Aries where it is strongest and most easily able to express that assertive quality.  This gives her a particularly strong will as well as an interest in warfare and power as illustrated by her career as a martial arts instructor and then service in the National Guard.  She actually has four planets in Aries, including Mercury and Venus along with the Sun in Mars.  That is a tremendous amount of Aries energy, with all of its fire and idealism.

This strong will has been impeded and challenged during the course of her life through an opposition from Pluto, planet of power and destruction/regeneration.  This is an extremely potent planetary combination which, when harnessed effectively, can bring great power and authority to the individual.  But there are usually many crises during the individual’s early life which test their strength and ideally, empower them for the future.

Relationships will not have been easy for Ms. Gabbard with her Venus in Aries and conjunct Mars, signifying tremendous independence and a dislike of compromise.  Whoever wrote “that which doesn’t kill you makes you stronger” was talking about Pluto, and all of her Aries planets are opposed by Pluto which tends to put stress on an individual that usually isn’t resolved until the second half of life.

Ms. Gabbard’s Moon is in the sign of Leo, another fire sign, indicating an individual who is strongly motivated to Do the Right Thing but also motivated by admiration.  She would tend to gravitate towards groups in which she feels appreciated and that her ideas are valued.  Jupiter (optimism and faith) is in the sign of Libra in her chart, suggesting that she has an ability to be diplomatic and express herself tactfully, but that Jupiter is stressed in a conjunction to Saturn, also in Libra, which hampers that ability.  This could cause her to give up on the idea of diplomacy in favor of an aggressive stance which the fire in her chart would prefer and in fact this has occurred with respect to her changes in position regarding LGBTQ rights and abortion.

Her chart has no water – the element of empathy and sensitivity (other than Uranus in Cancer which is a generational placement which does not bestow the water element to the personality).  She also has no earth, except for Chiron in the sign of Taurus which itself represents the earth – a wound to one’s sense of belonging to the earth, of feeling its abundance and security.  The earth element in a chart helps the individual to ground into a practical reality; to be able to create structure and routine which helps to stabilize the personality in the world.  These are two big lacks which in my opinion, would make it difficult for Ms. Gabbard to be a truly effective leader.

Ms. Gabbard’s Pluto system (Pluto opposing Venus, Mars and Sun in Aries) has been triggered over the past year by a challenging square from transiting Pluto which began this year and will continue throughout 2020. Pluto transits can be empowering for individuals with strong Pluto placements who have spent a lifetime undergoing basic Pluto training, such as Ms. Gabbard.  For another individual this planetary cycle could have been devastating, but Ms. Gabbard announced her candidacy for President in February 2019, on the very day that that Mars in the sky formed a challenging square to Pluto, activating her natal Mars/Pluto opposition (and marking her the return of Mars to its place in the natal chart, always a potent time.)  In October 2019, when she was attacked by that square of Pluto, in the guise of Hillary Clinton accusing her to be a Russian asset, Ms. Gabbard did not hesitate to fight back. Ms. Gabbard embodies that other saying, “When the going gets tough, the tough get going.”  She is tough, and she does not mess around.

My question about Ms. Gabbard would be whether her lack of sensitivity and practicality would make it difficult for her to make carefully considered decisions.  Her Libra Jupiter would certainly help her to see different sides of a question, but her chart shows an individual, in that case she would be a Libra, making impulsive decisions from gut instincts.  Still, in today’s contentious climate that may be just what non-centrist voters on both sides are looking for.

I am not one for prediction, but one thing I am keeping in mind with respect to the 2020 election is that the entire four year term will fall under the US Pluto Return. I am not expecting the political division and chaos to lessen in the next few years for this reason, and I believe that whoever is elected will reflect this chaos and Ms. Gabbard is a candidate who would be likely to further inflame and divide rather than unite.  Personally, I haven’t seen a candidate that I think can overcome the force of the US Pluto Return to facilitate greater unity so I’m not ready to take a stand and make a prediction yet.  Stay tuned!

Others in this series: