The astrology of violence in Gaza – 2021 edition

A portion of this article was posted in 2006.

Conflict in Israel suddenly exploded over the past few days, leaving political watchers to wonder what lit the flame.  As always, the astrological influences help to provide an explanation.

The astrological chart for Israel shows the Sun in the fixed sign of Taurus in square (challenging aspect) to Mars (warfare and aggression) in Leo. In mundane astrology, the Sun represents the spirit of the nation, and Taurus is focused in security and peace. A fixed sign, Taurus can be stubborn like the Bull by which it is symbolized, and does not easily adapt to the ideas of others. The square of Mars to the Sun shows a combative nature, and Mars in the royal sign of Leo can be arrogant and prideful. Chiron forms a T-square to the Mars/Sun opposition: the Sun is opposed by Chiron (the wounded healer), indicating a persistent healing crisis in the life of the nation that will pressure it to continually align with the truth. In the individual, failure to make this alignment results in chronic disease, and the same can be said of countries. Chiron also makes a square to Mars, indicating that an imbalance of aggression and the failure to create healthy boundaries will lead to great pain. 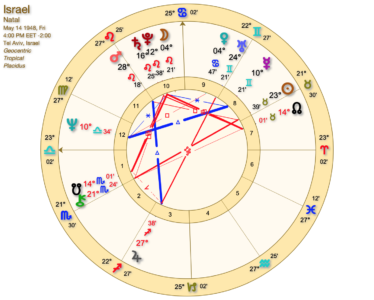 Four planets fall in Leo in the Israeli chart: Moon, Pluto, Saturn and Mars. Leo is the sign of self-oriented expression, and the Moon in Leo demands appreciation and recognition. Conjunct Pluto as it is in this chart, the Moon is constantly under pressure to prove its worth. The conjunction of Saturn and Pluto is a challenging one in any chart: Saturn strives for stability and practicality, it is the planet that inspires building something lasting. Pluto, on the other hand, demands authenticity and breaks down structures that are not for the highest good. The combination of these two planets generally requires a letting go of our own plans (Saturn) and a willingness to open up to the possibilities of transformation (Pluto). Resistance to this process leads to a constant crisis and breakdown of the structures we work hard to establish.  Israel’s beginning as a state was marked by constant conflict that mirrored this inner complex, and every time a major planetary trigger hits this sensitive complex the conflict erupts all over again.

Also present in the Israeli chart is the opposition between Uranus (radical ideas and change) to Jupiter (philosophy, meaning, expansion). Uranus is the idealist – the Utopian humanitarian where humans live together in brotherhood. However, Uranus ate his children, and has been known to destroy that which doesn’t fit into his ideals. Jupiter is the philosopher, the ideologue, the creator of theology and shared ideals. When two planets are in challenging aspect to each other, like the opposition, we tend to see the more negative manifestations of these planets, resulting in a self-righteous (Jupiter) desire for Utopia and the willingness to break through and destroy any obstacles in its path.

The idea of the “scapegoat” was prominent in the lives of the ancient Hebrews, and this archetype is also prominent in Arab/Israeli relations.  As I wrote in this article from 2008:

The modern nation of Israel was established to rescue the victims of the Holocaust, but in order to establish the nation, the fledgling Israeli nation had to fight with the local Arabs in order to expand Israeli territory.  Now the victim (Israel) becomes the perpetrator.  The Palestinians become the victims, not only of Israeli expansion but also in the refusal of neighboring Arab nations to permit them to enter these countries as refugees.  At first, Palestinian violence against Israel was mainly intended to help Palestinians return to their homes, but later as the collective rage against Israel grew, this violence became more generalized.  Now the Palestinians are also the perpetrators.  At the same time, Israel is portrayed as a victim against the aggression of Lebanon and Iran.  So both the Israelis and Palestinians are locked in a cycle of victim/perpetrator that has no end.

This latest conflict was stimulated by the passage of Pluto over the IC of the chart.  The IC (Imum Coeli) marks the cusp of the fourth house (in quadrant house systems) – the point where we find our ancestral heritage; our psychological roots, and the place we call home.  The idea of “home” is critical to the founding of Israel which was established as a homeland for Jews after centuries of persecution.  Pluto had already been operative throughout 2020, teaming up with Saturn in Capricorn to trigger a square to the Ascendant of the Israel chart, but the COVID-19 pandemic pushed the Arab-Israeli conflict into the background.  In 2021, however, the challenging square from Saturn in Aquarius to Uranus in Taurus is activating the trauma of the natal chart while Pluto dredges up the darkness of the genetic history.

We also see that the progressed Sun in the Israel chart conjoins the natal Moon which brings all of the emotional debris to the surface where the light of the Sun can process the reactive patterns more consciously.  This is likely to continue to bring the memory of trauma which has haunted both Israel and the Palestinians since Israel’s inception.

With this kind of chart pattern a great deal of introspection and awareness is necessary in order to move through difficulties.  As long as Israel continues to react with fear and violence, no progress can be made.