The astrology of Wanda Sykes: Did she really say that?

The astrology of Wanda Sykes: Did she really say that? 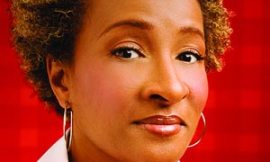 Wanda Sykes is an American comedian known for her sharp and blunt wit and was chosen to appear last week at the White House Correspondents Dinner.  Although she has been excoriated by many for her ruthless skewering of conservatives, her fans know that the Wanda Sykes that appeared at the dinner was a watered down version.  The real Wanda is armed with much sharper barbs and insults.

The birthchart of Wanda Sykes (born 3/7/1964, time unknown, Portsmouth VA) is very interesting.  Wanda has the Sun in Pisces, the sign of the shapeshifter.  Pisces is known to be sensitive and strongly spiritual, but their ability to adapt to every situation makes them excellent comedians and stage performers of all kinds.  Wanda’s Pisces Sun forms a harmonious trine to Neptune, the ruler of Pisces – an astrological “double whammy” that tells us that the Pisces/Neptune principle is very important in her chart.  The presence of Neptune inspires us to seek a higher purpose and a loftier goal, and to forge a deep connection to our true Self.

Wanda’s Sun is part of a stellium (big conjunction)  that includes Chiron, Mars and Mercury.  The presence of Chiron, reveals a deep insecurity and a struggle to define a sense of her Self.  The combination of Mars and Mercury explains her barbed (Mars) wit (Mercury) and a sharp  mind.  Mars also adds an impulsive element to the manner of speech (this is a quality shared by Joe Biden, who also has a Mars/Mercury conjunction).

When the Sun, Chiron and Mars combine there is typically a great deal of anger in the individual that stems from an inability (Chiron) to express and meet one’s needs (Mars).  But Wanda is more comfortable with her inner aggression because Jupiter, the planet of optimism and good fortune, is in the sign of Aries which is associated with Mars.  In Aries Jupiter grants a strong sense of initiative and an easy ability to grab for what we want.  There is still a sensitivity with the Mars/Chiron, but its expression in the outer world becomes easier than it would be otherwise.

This big stellium is opposed by the Uranus/Pluto conjunction that was in effect in the mid-1960s and individuals born between 1962-1968 carry the dynamics of revolutionary (Uranus) transformation (Pluto) in a much more personal way.  For Wanda, the comedic process is no doubt a way to release her anger in a way that she hopes will create serious change in the world around her, for that is the intention of the Uranus/Pluto conjunction in any chart.

While Uranus and Pluto are widely opposite all four Pisces planets, Pluto is exactly opposite both Mars and Mercury which are only about a half degree apart.  The addition of Pluto here adds a power and force that intensifies everything Wanda says.  There is an intense drive and a compulsive need to speak one’s mind that cannot easily be stopped.

It’s interesting that Wanda was involved in a campaign entitled “Think Before You Speak” that was aimed at youth in an effort to prevent anti-gay prejudice.  She wrote a book entitled

Yeah, I Said It which is an interesting title that reflects her “I don’t give a s&*t what anyone says” brand of humor.