The Autumn Equinox and the Harvest Moon

The Autumn Equinox and the Harvest Moon 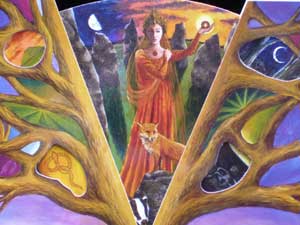 sadly I do not know to whom this artwork should be attributed!! The Autumn Equinox takes place on Wednesday when the Sun enters Libra, followed the next day by the Full Moon in Aries which is often called the Harvest Moon.  Thanks to John and Susan Townley for finding this interesting article on the subject from the Wall Street Journal of all places.

while the Babylonians celebrated their “main new year” in the spring, their tradition of having a minor autumnal new year has carried over into both mainstream religion and secular practice. Nick Campion, a historian of cultural astronomy at the University of Wales, notes two echoes of ancient autumn observances today. “It’s a custom inherited by Jews—hence Rosh Hashanah,” he told me, “while the beginning of the academic year in autumn is a secular legacy.”

The Harvest Moon is the Full Moon that occurs closest to the Autumn Equinox.  The fact that the Full Moon occurs within hours of the Equinox is significant because the energy of the Full Moon is embedded in the Equinox chart which will be used to forecast weather and other events of the next three months until the Winter Solstice.