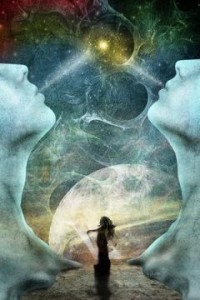 If you know who created this wonderful image please let me know!

I found this article on Reality Sandwich, which is a very cool website with lots of interesting writers and it occurred to me that this expresses one aspect of the conjunction of Chiron to Neptune which has been forming over the past several months.  Chiron and Neptune will be within a degree of an exact conjunction in June, but due to their retrogradation the conjunction won’t be exact for another year.  Still, their influence is combined in a slow infiltration of wisdom (Chiron) through dreams and inspiration (Neptune), or perhaps the wounding (Chiron) of our inner Mystic (Neptune).

In this article Paul Levy writes:

The Buddha, which literally means “the awakened one,” said “My form appeared like a dream to sentient beings who are like a dream. I taught them dreamlike teaching to attain dreamlike enlightenment.” When we begin to awaken to the dreamlike nature of reality, we realize we are all characters in each other’s dream. Like reflections in a mirror, we are all interconnected aspects of each other’s being.

To recognize the dreamlike nature of our situation is to recognize that we don’t exist as isolated entities separate from the universe, but rather as relational beings who only exist relative to each other. We are all related, parts of a greater family, the living multifaceted expression of a singular divine being. When we begin to awaken to the dreamlike nature of the universe we realize that the “dream ego,” which is who we’ve been imagining we are, is only an un-reflected-upon and assumed model of who we are and is not who we really are, but is itself being dreamed by a deeper part of ourselves.

Neptune is the Dreamer and the fusion that forms between ourselves and the Divine experience which merges all separateness so that we can become that Divine essence.  Chiron is familiar to us as the Wounded Healer, but it also serves the role of Mentor and bringer of great wisdom.

Where Neptune seeks to blur the boundaries of material reality for us, opening the doors to a mystical and very personal experience of the Divine, Chiron calls on us to heal any wounded places within us that have been ignored and which are holding us back from accelerating the process of soul growth and personal evolution.  The combination of the two can be an amazing gift  to those of us who are actively on a path of healing and learning, although that gift may not come easily.  They are both in Aquarius where the higher centers of the mind are activated.  Intuition will be heightened during this time, and the Neptune influence which is so good at dissolving our experience of normal reality could create some problems.

It’s an interesting synchronicity that the Showtime Network has a new series called The United States of Tara about a woman with multiple personalities. You may remember that it was during the Uranus/Neptune conjunction of 1992-1995 that “channeling” became a mainstream phenomenon.  When you combine Neptune with Uranus or Aquarius, the distinction between reality and fantasy can get quite interesting.

Between May and August, Jupiter will join Chiron and Neptune when they are as close as they will get to a conjunction in 2009.  Jupiter amplifies the effect and expands the possibilities that are inherent in this combination.  This is likely to be a time when the doorways of perception open wide and the dreamer awakens to the wisdom inherent in the dream.  As Paul Levy says,

Both the dreams of our ego and the dream of the deeper, dreaming Self, when invested with our attention, can materialize in, as and through our lives. The difference is that when we dream up our egoic fantasy into reality, it doesn’t ultimately alleviate our suffering, but rather, reinforces it. When we are the vessel for the dream of the deeper, dreaming Self to incarnate, however, we have gotten out of our own way and become an instrument serving the whole. The energetic expression of this realization is compassion, the hallmark of lucidity. The whole universe, which we are a part of and not apart from, heals itself in the process.